Texas DA and his wife are killed, two months after slaying of another prosecutor in his office 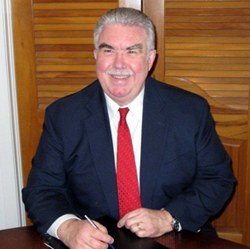 A second prosecutor in Texas’ Kaufman County has been shot to death along with his wife in their home about 20 miles east of Dallas.

Authorities discovered the slain couple, District Attorney Mike McLelland, 63, and his wife Cynthia, 65, on Saturday at their rural home in Forney, report the Associated Press, the New York Times, the Dallas Morning News and Reuters. Authorities are investigating whether the killings were related to the Jan. 31 death of Assistant District Attorney Mark Hasse, who was shot multiple times in the parking lot near Kaufman County’s courthouse.

Several dozen FBI agents are assisting in the investigation, and armed guards are stationed at the Kaufman County courthouse, CNN reports. Armed escorts accompanied several employees to the courthouse today, according to the Dallas Morning News Crime Blog.

McClelland had spoken with the Associated Press after the March 19 slaying of Colorado prisons chief Tom Clements by a man who rang his doorbell. McLelland said the attack on his deputy may have been carried out by a white supremacist gang and he carried a gun everywhere. No arrests have been made in the killing of Hasse. Police believe a white supremacist killed in a March 21 shootout with police, Evan Spencer Ebel, may have been responsible for Clements’ death.

Kaufman County prosecutors had participated in a multiagency task force that investigated the Aryan Brotherhood of Texas prison gang, resulting in a racketeering indictment unsealed in November. According to the Dallas Morning News, the Texas Department of Public Safety issued a bulletin in December saying it had received credible information that the group was planning retaliation. The public safety department has also identified Mexican drug cartels as a threat to law enforcement.

In a press conference after Hasse was killed, McClelland had vowed to bring the perpetrator to justice, according to the New York Times account. “I hope that the people that did this are watching, because we’re very confident that we’re going to find you,” he said. “We’re going to pull you out of whatever hole you’re in. We’re going to bring you back and let the people of Kaufman County prosecute you to the fullest extent of the law.”

Cynthia McClelland had worked as a psychiatric nurse. One of their five children is a Dallas police officer.

Updated at 9:10 a.m. to include comment by Eric Smenner. Updated at 2 p.m. with information about FBI assistance and security at the courthouse.