Texas judge is suspended amid allegations she used drugs, sexted a bailiff and hired prostitutes 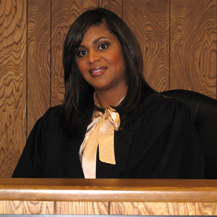 A Houston judge who traded sexts with a bailiff and admitted to past drug use has been suspended from the bench pending resolution of ethics charges against her.

The Texas Supreme Court suspended Justice of the Peace Hilary Green without pay in an order last Friday, report the Washington Post, the Dallas Morning News and the Houston Chronicle.

The State Commission on Judicial Conduct had sought the immediate suspension in a filing (PDF) that said Green had admitted to using marijuana and Ecstasy and misusing prescription cough syrup; admitted asking her bailiff to help her buy prescription cough syrup; and admitted sexually explicit communications with the bailiff. During the time of her drug use, she had presided over misdemeanor drug cases in her courtroom.

She was also accused by a former boyfriend of paying prostitutes for sex and of getting marijuana from court officers, who took it from a detainee. The commission said Green had also been deceptive in earlier communications with the commission.

The allegations had surfaced during a divorce and following her relationship with the boyfriend.

Green was appointed to the bench in 2007 and re-elected three times, most recently in 2016 after many of the allegations had been made public. “She’s very popular in the precinct,” Green’s lawyer, Chip Babcock, told the Washington Post.

Babcock said Green had stopped taking drugs in late 2013 or early 2014, and doctors have testified she is drug-free.