Texas did not violate the First Amendment when it rejected a specialty license plate featuring the Confederate battle flag, the U.S. Supreme Court has ruled in a 5-4 decision.

The Sons of Confederate Veterans had applied for the specialty plate in 2009 and 2010. In rejecting the application, the Texas Department of Motor Vehicles cited public comments indicating that many people find the Confederate flag offensive and associate it with groups that express hatred.

“In our view, specialty license plates issued pursuant to Texas’ statutory scheme convey government speech,” Breyer wrote. “When government speaks, it is not barred by the free speech clause from determining the content of what it says.” 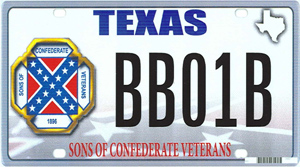 The proposed license plate from the Sons of Confederate Veterans. Image from court documents.

Breyer continued: “Were the free speech clause interpreted otherwise, government would not work. How could a city government create a successful recycling program if officials, when writing householders asking them to recycle cans and bottles, had to include in the letter a long plea from the local trash disposal enterprise demanding the contrary? How could a state government effectively develop programs designed to encourage and provide vaccinations, if officials also had to voice the perspective of those who oppose this type of immunization?”

License plates contain some government speech in their numbers and state identifications, Alito said. Beyond that, Texas has converted the remaining space on its specialty plates “into little mobile billboards on which motorists can display their own messages,” he said. Rejecting a private group’s message is “blatant viewpoint discrimination,” he said.

An index to Breyer’s opinion included an image of the proposed license plate, while an index to Alito’s opinion showed available specialty plates with images or messages for Re/Max, Dr Pepper, sports teams, grapefruit fans, pro-life proponents and golf enthusiasts.

The case is Walker v. Sons of Confederate Veterans.

Updated on June 22 to fix a typo in a quote.