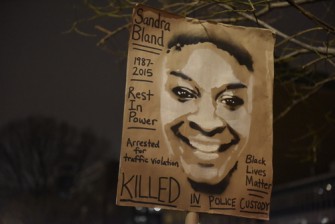 A poster carried in a Dec. 30 candlelight vigil in Manhattan in memory of Sandra Bland. a katz / Shutterstock.com

A Texas grand jury has indicted a state trooper there for lying about his traffic stop of Sandra Bland, the Associated Press reported Wednesday.

Bland, 28, was found dead in a jail cell in Waller County, Texas after she was arrested at the traffic stop. Her death contributed to a national debate over excessive police force against African Americans.

Bland had just interviewed for a job at Prairie View A&M University, her alma mater.

On July 10, Bland was pulled over in Prairie View for failing to signal a lane change. The conversation became heated when the trooper, Brian Encinia, asked her to put out her cigarette and she refused, pointing out that she was in her own car.

Encinia then said: “I’m going to yank you out of here.”

After Bland repeatedly asked why she was being apprehended, Encinia said: “Get out of the car! I will light you up!” and pulled out a stun gun. Both parties said the traffic stop ended in violence, though that took place off camera.

Three days after her arrest, Bland was found dead in her cell, hanged with a plastic garbage bag. The Houston Chronicle reported in July that Bland had filled out a form saying she had attempted suicide in the past year, but was not suicidal then.

Encinia was indicted for perjuring himself about how Bland was removed from the car. According to the New York Times, the trooper said he removed Bland from the car to further conduct a safe traffic stop, but the grand jury didn’t believe that to be true.

The same grand jury in December declined to bring charges against jailers, which may suggest it believed the death was a suicide. Bland’s family has expressed doubts about this. They have sued over the incident, saying the trooper used inappropriate force and Bland should have been monitored in the jail. That lawsuit is pending.

The FBI also launched an investigation in July.