Thanks to civics teacher's efforts, last convicted witch in Massachusetts is exonerated 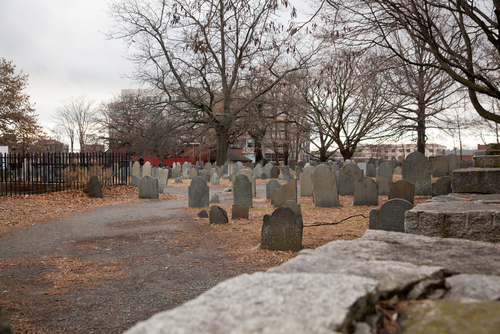 A winter day in December 2018 at the Old Burying Point Cemetery in Salem, Massachusetts, where the Salem witch trials took place. Photo from Shutterstock.

An eighth grade civics teacher, working with her students, helped win the exoneration of the last convicted witch in Massachusetts.

Teacher Carrie LaPierre of the North Andover Middle School in Massachusetts used her quest to exonerate Elizabeth Johnson Jr. to teach her students about how bills become law and how to contact lawmakers. She spoke with the New York Times and Courthouse News Service about her efforts, which came to fruition after Massachusetts Democratic State Sen. Diana DiZoglio added the exoneration to a budget bill.

Johnson had confessed to practicing witchcraft and was sentenced to death in 1693. The sentence was never carried out because the governor at the time issued a reprieve. Johnson had no heirs to fight to clear her name, and she was not included in Massachusetts bills exonerating witches that passed in 1957 and 2001.

Johnson may also have had mental disabilities, which may have made her exoneration less of a priority, according to Courthouse News Service.

Johnson may have confessed to witchcraft because accused people who did so generally avoided hanging, while those who maintained their innocence were quickly tried and put to death, according to Emerson W. Baker, a history professor at the Salem State University, who spoke with the New York Times. Some also hoped that a confession would help them avoid torture.

Thirty people were convicted in Salem, Massachusetts, where the trials took place, during a four-month period. Nineteen were executed, and all had pleaded not guilty.

Overall, 156 people were accused of witchcraft in Essex County, Massachusetts, which includes Salem and Andover, where Johnson lived. She was one of 45 people accused in Andover.

LaPierre told the New York Times that she was “excited and relieved” that Johnson had been exonerated. She also expressed satisfaction with the outcome of the class project with Courthouse News Service.

“It’s a great way to do civics education, and it has nothing to do with critical race theory, so everyone feels good about it,” LaPierre told Courthouse News Service.