'The Defenders' is a legal classic: Why has it been hidden away? 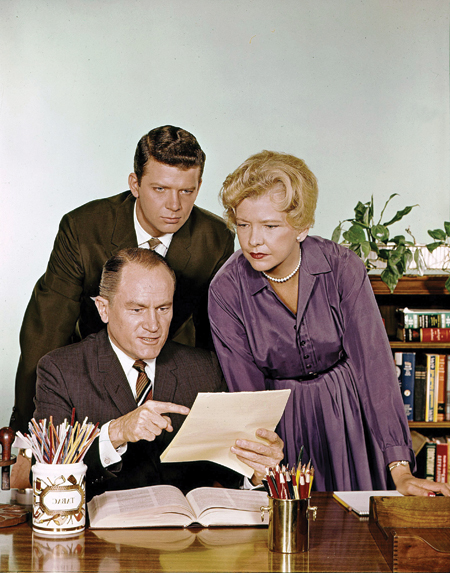 I wanted to write another “look back” column this week. I decided to take a cue from one of my readers and review the “best” episode of the classic television legal drama The Defenders.

This reader emailed me after my Perry Mason column and advised I look into the series, which starred E.G. Marshall and Robert Reed (Mr. Brady of The Brady Bunch for those who, like me, are bad with actor’s names) as father and son defense attorneys unafraid to take on the tough case. Seeing as I’m a defense attorney as well, that always perks my ears.

I had heard of the series before but figured I might find it to be a bit hokey based on the era it aired. The series ran on CBS from 1961 to 1965. I like plenty from that period, but many of the television series in that time frame give off a false sense of security. Perhaps it’s a general feeling, as there were strict guidelines imposed on television during those years. Maybe it’s an unfair comparison to today’s “anything goes” broadcasting. Whatever it is, it most likely has deterred me from discovering some classic gems.

However, preliminary research informed me The Defenders was different from its contemporaries. The Defenders knew where the line was, and they weren’t afraid to push it … both on screen and off. From what I’ve read, the series touched on social topics and issues of the time that were more or less taboo for broadcast television (and table talk as well). Abortion, capital punishment, immigration quotas and jury nullification were just some of the various issues the series addressed.

But, as I sat there listening to my 6-month-old son scream in my ear (to be fair, he was sick), I experienced an issue of first impression. No, not the fact that my son was wailing bloody murder; he does that every time sleep time is not his idea. It was the first time I couldn’t find a way to view an often-suggested series online for this column. With all of the streaming capabilities at my disposal, I somehow came up empty.

My search wasn’t entirely in vain. I ran across a different series called The Defenders … which was also about attorneys. It starred Jim Belushi, so that’s two pluses in my book. On top of that, I ran into Marvel’s The Defenders, which jogged my memory: I need to watch the latest season of Daredevil … also an attorney. That’s two potential new columns right there.

Despite those two bright spots, I wasn’t finding much. After a few days of distance from the idea, I went back to the well. A few different Google searches revealed that the quest to find CBS’ early 1960s The Defenders online was not going to be an easy task.

I was able to find a box set of the series’ first season on Amazon. I thought I might have a chance to watch it on Amazon Prime, but again I ran into the proverbial brick wall. Even though the series came highly recommended (and won its share of Emmy Awards during its short run), I didn’t want to buy the entire DVD set until I had a chance to judge it for myself.

I checked Dailymotion. No luck. I searched the Museum of Broadcast Communications’ website. Nothing. The show was listed, but there wasn’t anything in its archive record that could lead me to a full episode of the series. I checked CBS All Access and still nothing. By this point, I had invested far too many hours trying to get my digital hands on more than a few stills and small snippets. I had to finish the fight.

I went to my trusty friend the episode.ninja, but the series was not even listed. It was starting to seem as if there was an evil plan to erase this show from our collective viewing consciousness. Never mind the fact I couldn’t rely on the ninja to give me a consensus ranking as to the best episode. I didn’t have a starting point, or even a point of reference to find any of the full episodes.

I finally stumbled across this article from The A.V. Club explaining that I wasn’t the first person to fall into The Defenders rabbit hole. For whatever reason, the series is basically absent from the World Wide Web. Maybe it’s copyright issues. Even still, CBS would have to be very diligent to eradicate full episodes from the internet. Possibly, as The A.V. Club mentions, The Defenders’ short run resulted in no one picking it up for syndication later on. Regardless, after all my due diligence, I had no choice but to throw up my hands.

I knew all along there were at least a few clips on YouTube. I just hate to rely on that. When I’m trying to view something outside of music or how-to videos, YouTube is usually my last resort if it provides nothing more than fragments and snippets. If I haven’t seen the series before, a partial scene can be misleading. My only hope for finding something verifiable was to look for Robert Reed in one of the clips. There was also the possibility that something else might tether whatever I could see to a stake of authenticity.

ALL THAT’S LEFT OF THE DEFENDERS … PROSECUTORS?

Finding the intro and theme song wasn’t too difficult. At first, I was only able to discover some short segments of William Shatner as a prosecutor, but that put me on the right track. Apparently, it was somewhat of a recurring role for him on the show, which is odd since he originally played the Reed role of the younger defense attorney in the pilot for The Defenders. I was eventually able to find a clip from that as well. Regardless, it appeared that Shatner was more of a prosecutor than a “defender” in regard to the actual series run.

Surprisingly, there aren’t many segments, if any, showing Marshall and Reed in action defending their clients. There was a blooper reel that was surprisingly crass (and probably a bit offensive to some), and that was the most screen time that I could find of the two together. Sadly, there simply aren’t many clips of the father-son duo available.

Oddly enough, though, I was able to find another full four minutes and 18 seconds of a prosecutor taking center stage on the show. In what turned out to be a surprisingly spot-on explanation of the criminal justice system in a nutshell, Jack Klugman graced my screen as he laid into Reed’s character regarding the function of the prosecution and the defense in a criminal case. The scene also exemplified a real-world perspective of what often happens when a case looks like a hung jury or results in a mistrial. It was well-written, well-acted and grounded in reality.

I was happy with what I had found, and it definitely piqued my interest into possibly purchasing the box set. Still, more than anything, though, I was confused. Why are the only clips you can find online of a show called The Defenders solely centered around prosecutors? I’m sure it’s nothing more than a coincidence. Or is it … ?

Those in the know, please share your knowledge. What’s your favorite episode of The Defenders? When was the last time you watched the original series?