The Battle on the Home Front: Special Courts Turn to Vets to Help Other Vets 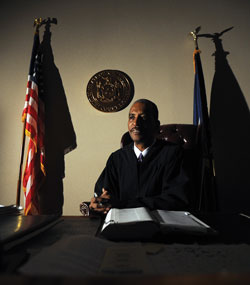 When Assistant District Attorney Ray Herman first became involved with Buffalo, N.Y.’s alternative treatment program for military veterans who’d found themselves on the wrong side of the law, he had his doubts.

But slowly, case by case, what Herman saw changed his mind. “I really support this,” he says. “There’s a very, very high percentage of success with the program, which is an excellent result for everyone because these are people that are no longer going to be in trouble with the law. So the program works.”

Veterans treatment courts like Buffalo’s are sprouting in courtrooms across the country, with 80 having been established in the past 3½ years. The growth—largely independent of the federal government—has been sparked by the recognition of judges, prosecutors, public defenders and legislators that a significant number of veterans are returning from the wars in Iraq and Afghanistan with mental health issues that can manifest themselves in criminal acts both great and small, and that steering them toward treatment they may have initially rejected will benefit society in the long run.

The problems have myriad sources, many of them rooted in the horrors of war, such as the out-of-nowhere shock of explosions from hidden roadside bombs, an enemy weapon that can damage the psyche as well as the body; the stress of near-continuous combat; the long deployments, which for several years in Iraq were lengthened from a year to 15 months away from home.

For infantrymen like John Clum, the stresses took a toll upon returning home.

Clum served and fought twice in Iraq. His first combat deployment was in 2005 with the 82nd Airborne Division. The duty was rough. The unit sustained near-daily rocket and mortar attacks. His battalion lost 14 members, some of them close friends. “I was pretty tight with those guys,” Clum says.

And a second Iraq tour in 2007, after he had spent time back home in Tulsa, Okla., and gotten married, Clum says, “was far more intense than my first one.”

He found a job doing construction work at oil refineries. The work took him away from home a lot, and his marriage fell apart. He had other troubles readjusting to civilian life. He “missed the guys” and, knowing they were deployed to Afghanistan, felt he had let them down by stepping away.

He started hitting the bottle.

“I was drinking every day,” Clum says. “Blackout drinking.”

He was arrested twice for drunk driving. Just before receiving a one-year suspended sentence in March 2010, Clum tried to hang himself in his jail cell.

Then he read a newspaper story about a special court program for veterans. He called his public defender, and soon he was in Judge Sarah Day Smith’s veterans treatment court in Tulsa.

Like similar courts created over the past few years across the nation, Smith’s court specializes in working with troubled veterans to get them counseling, and linking them to government treatment and other benefits they may have not known about or skipped over upon their return home. The program is aimed at helping them regain the sense of discipline and camaraderie they had in uniform, and steering them onto a more positive course in life.

“It’s a very hard program,” Clum says, but he adds that he has progressed to the point where he now plays a positive role in the lives of his son, 13, and daughter, 10. And he has a job that he found himself, installing home generators for a veteran-friendly company.

Click here to read the rest of “The Battle on the Home Front” from the November issue of the ABA Journal.