The High Bench vs. the Ivory Tower 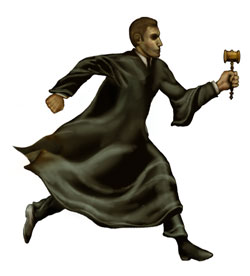 Searching for the proper understanding of a refined issue of bankruptcy law, Judge Thomas L. Ambro discovered his saving grace in a 1998 law review article.

“I felt I had found my Rosetta Stone,” wrote Ambro of the 3rd U.S. Circuit Court of Appeals at Philadelphia, referring to an article in the University of Pittsburgh Law Review. It instructed the judge on how to write a more erudite opinion.

When it comes to law review articles, “all I ask for is good analysis that instructs and sometimes persuades,” Ambro wrote in 2006 in The American Bankruptcy Law Journal. “Who it comes from and where it appears adds not a whit to its content.”

On the other hand, when asked about the influence of such articles on Supreme Court opinions, Chief Justice John G. Roberts Jr. dismissed them as abstract and irrelevant.

“Pick up a copy of any law review that you see,” Roberts told the 4th Circuit Judicial Conference last June, “and the first article is likely to be, you know, the influence of Immanuel Kant on evidentiary approaches in 18th century Bulgaria.”

Added Roberts, “I’m sure [it] was of great interest to the academic that wrote it, but it isn’t of much use to the bar.”

Somewhere between the Rosetta Stone and a thesis on Kantian legal philosophy lies the status of the modern law review. Few law schools or legal organizations are without one—or, more likely, three or four, as they multiply to cover the increasing number of legal specialties, such as environmental law, law and economics or civil rights.

Yet many judges and practicing attorneys spurn law reviews, feeling snubbed by the high-strung theories that professors churn out, claiming the articles are mere navel-gazing and of little use to understanding everyday law. They are aimed at a small audience of academics in one tiny field of interest, judges and lawyers say, rather than a broad readership.

Scholars respond that judges and attorneys too simply shoo away important new ideas that tie law to related intellectual fields—known as the “law and …” school of thinking, which marries legal concepts to such other scholarly pursuits as economics, sociology or history. The result, they say, are discoveries that should liberate confined legal thought to real-world problems.

What’s more, publication remains professorial currency, with tenure—the golden ring of academia—waiting for those who can stock away the most articles.

The standoff between judges and practitioners on the one hand and academics on the other is hardly a new dispute; it has been going on since the early 20th century, when law reviews flourished.

But in the wake of Roberts’ remarks, the discord has resurfaced. But this time, with the speed of the Internet, critics didn’t have to wait until the next quarterly law review to air their gripes. Instead, via email, replies came fast and furious.

“Legal scholars will on occasion take up Kant (and there’s no shame in that),” wrote University of Maryland law professor Sherrilyn Ifill in an Internet response to Roberts’ remarks. “Published law review articles offer muscular critiques of contemporary legal doctrine, alternative approaches to solving legal questions, and reflect a deep concern with the practical effect of legal decision-making on how law develops in the courtroom.”

Added Ifill, “Such scholarship can assist judges in explaining complex legal doctrine, but also in working through the application of that doctrine to modern legal controversies.”

Although the dispute persists, the underlying terrain has changed from the 1990s. As judges face overburdened dockets, depressingly low pay and the politicization of appointments, many belittle law reviews as lacking the practical advice that would help make their decision-making easier in stressful times.

“I will specifically ask my law clerks to find articles,” says Ambro, a former editor of the ABA’s The Business Lawyer magazine. “They come back saying there’s good news and bad news. The good news is that there are 32 articles. The bad news is that none is on point.”

Click here to read the rest of “The High Bench vs. the Ivory Tower” from the February issue of the ABA Journal.