The Legal Field Attracts Psychopaths, Author Says; Not That There Is Anything Wrong with That 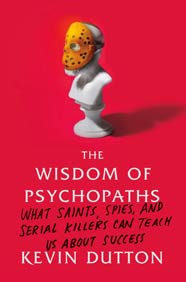 CEOs and lawyers are among the professions with the most psychopaths—evidence that psychopathic traits aren’t all bad, according to a new book by an Oxford research psychologist.

The book is The Wisdom of Psychopaths: What saints, spies and serial killers can teach us about success. The Washington Post and the Wall Street Journal have reviews.

It’s a matter of degree, author Kevin Dutton argues in the book. At the high end of the scale are serial killers like Ted Bundy. But some psychopathic traits can pave the way to success and help people deal with the stresses of living, Dutton says. His “Seven Deadly Wins” are ruthlessness, charm, focus, mental toughness, fearlessness, mindfulness and action.

Dutton says some professions attract people with psychopathic tendencies, and lawyers are second on the list. The Post quotes one successful lawyer who spoke to Dutton. “Deep inside me there’s a serial killer lurking somewhere,” the lawyer says. “But I keep him amused with cocaine, Formula One, booty calls, and coruscating cross-examination.”

Dutton developed his list of the top psychopathic professions through an online survey last year, he told Smithsonian.com in an interview. “Any situation where you’ve a got a power structure, a hierarchy, the ability to manipulate or wield control over people, you get psychopaths doing very well,” Dutton said.