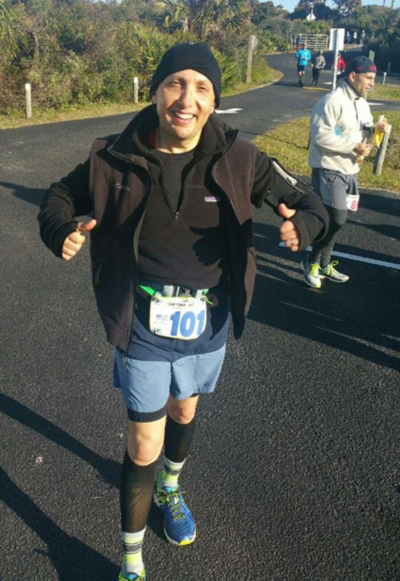 Starting this Sunday, a Florida lawyer will run six marathons in six days to raise funds for legal aid.

Mike Freed, a business attorney with the law firm Gunster, will be attempting this feat to support Jacksonville Area Legal Aid (JALA). Though funding legal aid is something Freed feels passionate about, the Freed-to-Run event had its beginnings in a friendly competition between him and his wife.

Last year, human rights attorney Crystal Freed raised $40,000 for victims of sex-trafficking in India by holding a Bollywood-themed benefit. Mike Freed started to think about how he could out-fundraise his wife.

He’s had a long-term connection to JALA, for whom he does pro bono work. Since the Great Recession, the need for legal aid assistance among lower and middle-income families in the area has risen sharply. JALA estimates that 48 percent of Jacksonville residents qualify for civil legal aid. Meanwhile, Florida is one of three states that provides no state funding for legal services.

“Frankly I was just overwhelmed by the need that’s there,” Freed says.

Freed had only began running seriously in the past year, but he has completed four marathons and three ultramarathons, so it came to him that a marathon event could be a way to raise both funds and awareness of the dire need to support legal aid services.

“I thought starting in the state capitol made sense,” Freed says. So he bought a map and began planning a route between Tallahassee and Jacksonville. “I realized that there was a courthouse along U.S. Route 90 every 26 to 30 miles, and that that was about the length of a marathon.”

From there, the Freed-to-Run event took shape. Every morning for six days, Mike will start at a different courthouse—cheered on by anyone who manages to make it to the courthouse by 7:30 a.m.—and run his 26.2 miles. On Sunday, May 28, he will begin his journey at the Florida Supreme Court Building in Tallahassee. On Friday, June 2, he will finish at the Duval County Courthouse in Jacksonville, with the opportunity for friends, colleagues and well-wishers to donate $100 and run the final 5K with him. On the courthouse lawn from 3:30 to 5:30 p.m. will be an event titled “The Finish Line—Celebrating Pro Bono Attorneys,” with free barbecue and beer provided by sponsors. 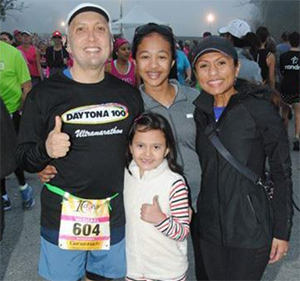 Attorneys Mike and Crystal Freed and their two daughters at one of Mike’s races. (Photo courtesy of Jacksonville Area Legal Aid.)

Freed’s wife Crystal and their 8- and 13-year-old daughters will travel alongside Freed in a van to provide water and any support he needs during the six legs of his journey. When asked if his daughters will run with him, he laughed and said, “It depends on how well they behave inside the van!”

Freed hopes to pull in $50,000 for the agency, and had raised more than $40,000 in donations as of Monday afternoon. He landed on that figure as a goal both because it would best his wife’s total and because it could be the bulk of a yearly salary to hire a new attorney at JALA.

So does he feel confident that he can hold up through six days of marathons?

“It’s funny, I’ve been so busy focusing on raising that money that I haven’t had a chance to worry about the running!” Freed says.

Anyone interested in either donating money or in registering to run the final 5K alongside Freed can find more information on JALA’s website and in this press release (PDF).

As for JALA, they say of Freed, “His vision and mission are just as big as his heart.”

Freed brushes off such praise, saying that the focus should be on the cause and not the person. Freed is a representative for Florida in the ABA House of Delegates. He mused, “If just 10 percent of ABA members” were able to contribute time or funds to improving access to justice, “imagine the difference we could make.”