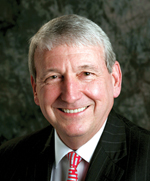 Incoming ABA President H. Thomas Wells Jr. says he got the message in talks with other bar leaders over the past year or so.

There is widespread concern, he says, about “potential threats to judicial independence, and to fair and impartial courts” at the state level.

Wells and other bar leaders also have expressed frustration with the partisanship that is hampering the nomination and confirmation process for federal judges.

Wells says those issues will be among his priorities as ABA president. Wells, a shareholder in Maynard Cooper & Gale in Birmingham, Ala., will begin his one-year term in August at the close of the association’s 2008 annual meeting in New York City. Continue reading in the August issue of the ABA Journal.