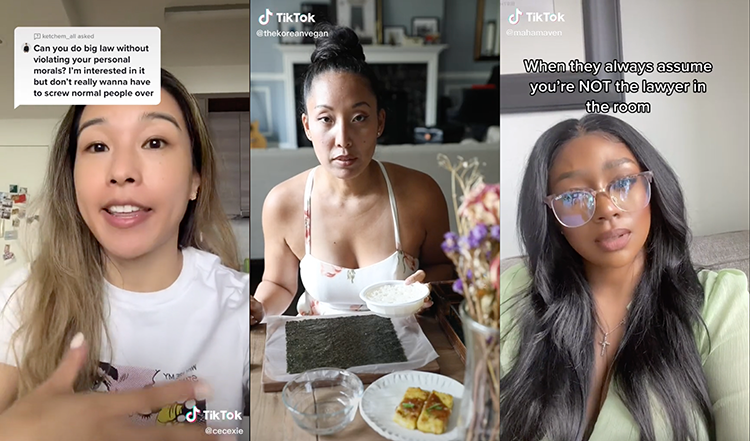 Three BigLaw attorneys recently offered insight into their experiences with TikTok, a social media platform that allows users—there are more than 100 million in the United States—to create and share short videos.

Joanne Molinaro, a partner at Foley & Lardner in Chicago, told Bloomberg Law she downloaded the app during the pandemic and initially posted videos about being a lawyer and living during the Trump presidency.

She had started “The Korean Vegan” blog four years earlier and soon gravitated toward posting video recipes and sharing stories about being the daughter of Korean immigrants. She also gives her 2.4 million followers advice as she prepares meals, and according to Bloomberg Law, one of her videos about a breakup has garnered nearly 10 million views.

Cecillia Xie, an associate at Morrison & Foerster in New York City, told Bloomberg Law she also posted on TikTok for the first time after COVID-19 forced her to shelter in place.

In the video, which has been viewed more than 900,000 times, Xie joked about what lawyers and marketing professionals might be doing when they’re supposedly working from home. She has since gained more than 270,000 followers, who have been treated to other posts about law school and the legal profession.

“People want to know what the truth is and what is the good and the bad about the legal profession,” Xie told Bloomberg Law.

Chukwufumnanya “Fumnanya” Ekhator, an associate at a firm in Pennsylvania that she requested not be named, created her TikTok account in late 2019. She had already been posting advice on makeup, dating and law school on her YouTube channel for seven years.

She told Bloomberg Law that she hopes her videos, which also include tips on mental wellness and relationships, help change the perception of BigLaw attorneys. The daughter of Nigerian immigrants now has about 120,000 followers.

“I’d never seen any lawyers that I felt I could relate to, so for me, it’s almost about not letting this idea of professionalism or this idea of what a lawyer acts or sounds like be a limit to my online personality,” Ekhator said.

Bloomberg Law also spoke to Jan Jacobowitz, a legal ethics adviser who has written about millennial lawyers. She told the publication that firms may be more lenient about their social media personalities because of their impact on the business of law.

“Law firms have realized that the younger generation is different, and different is not bad,” Jacobowitz said.

Even though she has seen increased cultural competency between generations of lawyers, Jacobowitz told Bloomberg Law she recommends that associates fully understand their firms’ approach to social media.