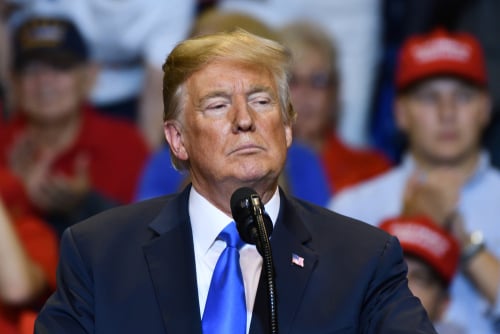 One of the three professors said Trump’s actions amounted to an attack on constitutional safeguards against establishing a king in the United States. A fourth professor, called by Republicans, said he is no fan of Trump, but the Democratic investigation is hurried and “slipshod.”

The New York Times provides links to the testimony. These are the professors, and here are statement highlights:

• Noah Feldman, a professor at Harvard Law School and author of several books, including a constitutional law case book and a biography of former President James Madison. Feldman began his remarks with three conclusions:

• Michael Gerhardt, a professor at the University of North Carolina’s law school, who has written books on impeachment. He said the record compiled shows that Trump committed several impeachable offenses, including bribery, abuse of power in soliciting a personal favor from a foreign leader to benefit his political campaign, obstructing Congress, and obstructing justice in the investigation by former special counsel Robert Mueller.

Discussions of impeachment by the constitutional framers indicated that not all impeachable offense are violations of criminal statutes, and not all felonies are impeachable offenses, Gerhardt said. What does matter, he said, “is ultimately the context and gravity of the misconduct in question.”

Gerhardt interpreted Trump’s actions as an attack on constitutional safeguards against establishing a monarchy. “If Congress fails to impeach here, then the impeachment process has lost all meaning, and along with that, our Constitution’s carefully crafted safeguards against the establishment of a king on American soil,” he said.

• Pamela Karlan, a professor at Stanford Law School, who co-founded the school’s Supreme Court litigation clinic and chairs the board of directors for the liberal American Constitution Society. She’s also the author of several leading case books, including one on constitutional law and another on the law of democracy.

One key reason for including an impeachment power in the Constitution “was the risk that unscrupulous officials might try to rig the election process,” Karlan said. The founders would have been “horrified” by the idea that a president would seek the aid of a foreign government in his reelection campaign, she said.

“Put simply, a candidate for president should resist foreign interference in our elections, not demand it,” she said.

• Jonathan Turley, a professor at the George Washington University’s law school, who is being called as a Republican witness and has written on presidential powers. Turley said he hasn’t had much admiration for any president in his lifetime, including Trump. He has also criticized Trump for suggesting an investigation of Hunter Biden with the Ukrainian president.

But “one can oppose President Trump’s policies or actions but still conclude that the current legal case for impeachment is not just woefully inadequate, but in some respects, dangerous,” he said.

Turley said the record lacks direct evidence of a quid pro quo, and the House hasn’t subpoenaed key witnesses who would have direct knowledge. Democratic leaders have explained that they want a December vote and are not willing to wait for court rulings. Turley questioned the need to hurry.

Congress will be delivering a “thin record” to the full House to meet an arbitrary deadline, Turley said.

“I am concerned about lowering impeachment standards to fit a paucity of evidence and an abundance of anger,” he said. “If the House proceeds solely on the Ukrainian allegations, this impeachment would stand out among modern impeachments as the shortest proceeding, with the thinnest evidentiary record, and the narrowest grounds ever used to impeach a president. That does not bode well for future presidents who are working in a country often sharply and, at times, bitterly divided.”