5 Tips for Time and Technology Management 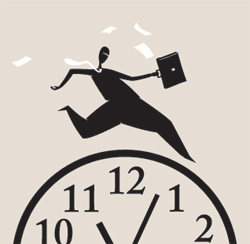 Unlike many programs at an annual meeting, one began Thursday at 8:30 a.m. sharp: “Time Management: Is It Really 5:00 p.m. Already? Where did the Day Go?” The biggest takeaway from the Law Practice Management Section program is that what we have known as time management has largely become a matter of technology management.

Foster and Affinity partner Paul Unger, a former civil litigator, spent some time interacting with the approximately 40 participants, a number of whom straggled in late. The presenters asked for a show of hands to see who gets how many emails daily and who has the biggest inbox. One person had an inbox with a staggering 35,000 emails.

So for good reason, the heart of the presentation was about gaining control of email run wild, though it included other “interruptions” such as phone calls and office walk-ins, which on average hit us every three to four minutes.

• Master the use of Outlook, especially for sorting and grouping emails. The program booklet given participants not only outlines various needs and approaches, it also included printed screen-grabs for step-by-step, how-to instruction – a sort of Tech-Time Management for Dummies.

• Learn how to integrate use your smartphone as the ultimate capture tool for Outlook, so any random thought or task of value can be quickly recorded in a central location – ditto for iPads.

• Habit is important. Set firm times during the day, probably as many as five, for 10 to 15 minutes each, to delete, delay, reply to or sort emails. Again, as much as possible, this is to be done at the same time each day.

• Use the “Three Minute Rule” in handling email. If it can be responded to or otherwise dealt with in three minutes or less, do it now. Later, it will take longer.

• Using the inbox as a to-do list, says Unger, is bad because you end up with a deep bucket full of emails and that’s your filing system.

After pushing the necessity and wonders of technology for time and task management, Phillips added that many early adopters have become very rude by overusing gadgets in social situations. “Pay attention to the people that you’re with.”