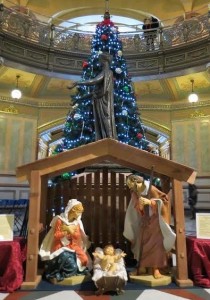 Nativity scene at the Illinois Capitol.
Photo from the Thomas More Society.

As carolers sing of the joys of the Christmas season, it isn’t only spiked eggnog and mistletoe that present issues for attorneys responsible for keeping employers and government entities out of legal trouble.

‘Tis the season for potential litigation over holiday displays, and what seem to be opening salvos are already being launched. The question, for many officials: How can they encourage celebration that may have a religious basis without imposing on those with differing views and risking a lawsuit?

In Tallahassee, Fla., a nativity scene was installed Tuesday at the Capitol by private groups with the help of a conservative Chicago-based law firm, the Thomas More Society, the Associated Press reports.

In addition to a press release about the Florida display, the law firm also points out in another press release that there is a similar display in the rotunda of the Illinois Capitol. Although they promote religious belief, the firm writes, the displays “represent a constitutionally protected expression of faith—the observance of Christmas—by private citizens in a traditional public forum, namely, the Capitol rotunda. The Christmas displays are privately funded and sponsored, bereft of any government aid or endorsement, and therefore, these displays are clothed and armored with the full protection of the First Amendment of our U.S. Constitution.”

However, the AP reports, because the state is allowing some private groups to use the Capitol to express their views, it is now opening itself to permit others to express opposing views, says Howard Simon. He is the director of the Florida chapter of the American Civil Liberties Union. 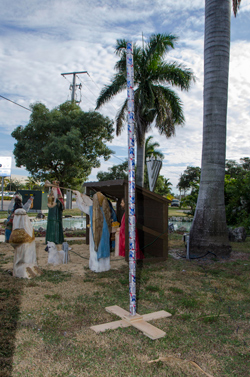 Indeed, that is exactly what is already happening in at least one other state’s headquarters this year: In Madison, Wis., the Capitol has a holiday display that features a Christmas trees, a menorah and a Festivus pole, according to another Associated Press article. A sign next to the Festivus pole (a concept popularized by a 1997 Seinfeld episode) notes that there will be an airing of grievances—another feature of the “Festivus for the rest of us” event—on Dec. 23.

And in Chicago’s Daley Plaza, a large “A,” representing atheists and agnostics, has joined the traditional Christmas and Hanukkah displays maintained by private groups on city property, reports the Chicago Tribune.

Meanwhile, a Florida city that allowed a Festivus pole made of beer cans to be displayed next to a traditional nativity scene last year is taking a new approach. Deerfield Beach has banned all holiday displays on city property, except for those put up by the city itself. That has resulted in the removal of a traditional nativity scene and menorah from an area near the firehouse at the intersection of Federal Highway and Hillsboro Boulevard this year, according to Local10.com and the Sun-Sentinel.

Resident Caryl Berner had supplied the menorah, year after year, and told the station she felt “violated” by the removal of her personal memorial to the Holocaust. “The city of Deerfield Beach definitely stole Hanukkah,” she said, noting that there is still a Christmas tree lighting ceremony.

ABA Journal: “The Subtle Art of the Party”

Updated on Dec. 4 to include Chicago Tribune story about Daley Plaza.