FBI compiles a glossary of Internet slang for its agents 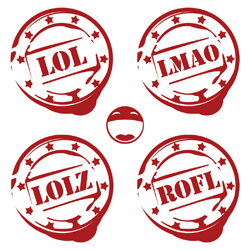 FBI agents who are confused by Internet terms such as TLOL (totally laughing out loud) and NIFOC (naked in front of computer) can consult an 83-page glossary compiled for their use.

The FBI released the guide (PDF) in response to a freedom of information request by the website MuckRock, though the low-resolution copy is barely legible. PC Magazine, the Washington Post and NBC News have stories.

MuckRock posted the guide under the heading “Twitter shorthand,” but the Washington Post says many of the terms are rarely used. ALOTBSOL (always look on the bright side of life) has been tweeted fewer than 500 times in eight years of Twitter’s existence, for example. The story lists 18 others, including these:

• ITYWIMWYBMAD (if I tell you what it means will you buy me a drink?), 250 tweets

• BTDTGTTSAWIO (been there, done that, got the T-shirt and wore it out), 47 tweets