Congratulations to the creative minds and get-out-the-vote spirit behind the sugary Peeps dioramas that drew the most votes in our 7th annual Peeps in Law diorama contest!

We saw fewer entries this year, but the off-beat, lighthearted take on the law, legal history and legal news more than met our expectations. 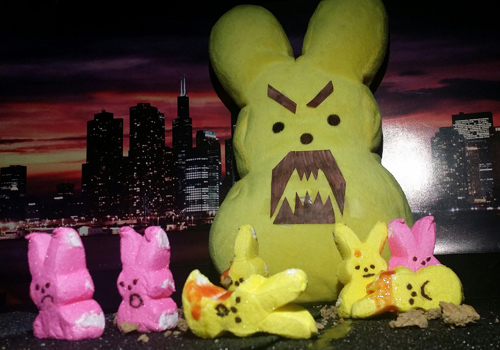 Caption: Legendary Pictures Productions, LLC v. Lin Pictures, Inc.
In the PEEPZILLA case, the court ruled that the parties did not agree to settle any disputes via arbitration. The dispute between its producers enraged PEEPZILLA, who took out his frustration on the innocent PEEPS of New Peep City. The carnage of innocent bloodied PEEPS shocked the town, who all agreed to settle any future disputes via an all-you-can-eat PEEP buffet.
Submitted by Justine Perry & Monika Luken, the original Peeps at Law 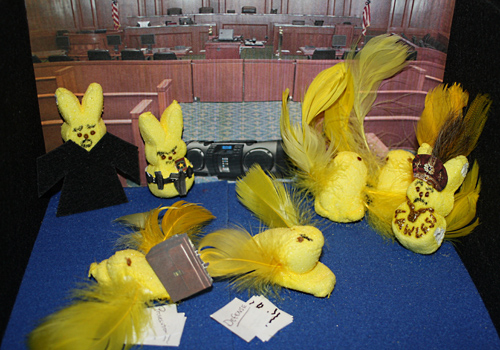 Caption: The Prosecutor expected to lose given the recent case decisions regarding this same issue.
Peep-Winniford III, a rapper also known as “Peep-Lawless-Peep,” is accused of inciting violence through his lyrics. Events took a terrible turn for the defense once the prosecutor convinced the judge to allow the court to hear a sample of the rapper’s music. After hearing the lyrics “Beat that Peep!”, the judge couldn’t believe what happened next. You could hear screams from the courtroom: “It’s a fight!” The bailiff could not stop the defense attorney from beating the prosecutor with his briefcase.
Submitted by Mrs. Mercer of Colorado

The Case of the Stolen Peep-berge Eggs (3rd Place) 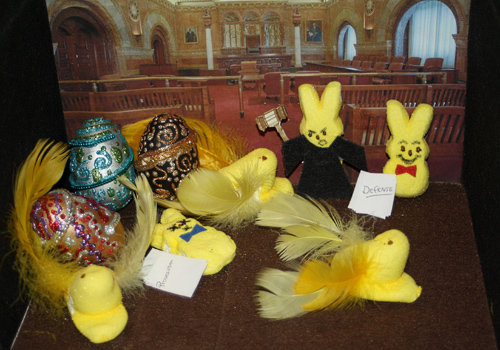 Caption: Defense counsel was elated! His lucky red tie was working. His client had been charged with the theft of the world famous “Peep-berge Eggs.”
The artistic beauty of the eggs caused many jury members to lose control, trampling the prosecutor and grabbing the eggs while chanting “MINE.” The judge tried everything but failed to gain control of the courtroom. Given the current events, the Defense was now certain his client’s plea of insanity would meet with more empathy from the judge.
Submitted by Mrs. Mercer, Colorado

In addition to the top vote getters, Journal staff wanted to applaud two entries this year that warmed our hearts. They were both well executed from a technical standpoint, and had the added bonus of having been created by lawyers and their teen, tween and elementary associates. 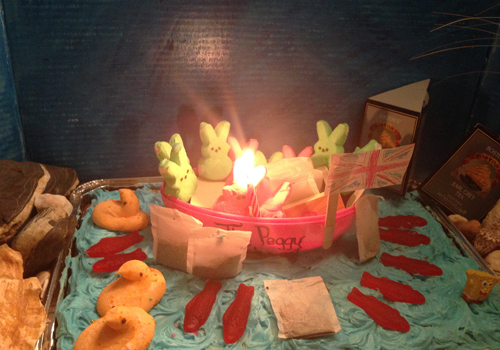 Caption: This is the Boston Peep Party, a protest against the Tea Act of 1773 and taxation by the British!
The green peeps on “The Peggy Stewart” represent the Americans, and the pink, the British. On the night of December 16, 1773, the American colonists boarded the ship (and two others) and threw out 342 chests of tea into the Boston Harbor. They also made the British burn “The Peggy Stewart.” (Note the frightened ducks and fish scurrying away!) These acts of revolt resulted in the promulgation of the Coercive Acts in 1774, leading to the American Revolutionary War.
Submitted by Morenike Oyenusi and her two daughters, Olamide (age 11) and Oyinade (age 14) of Baltimore 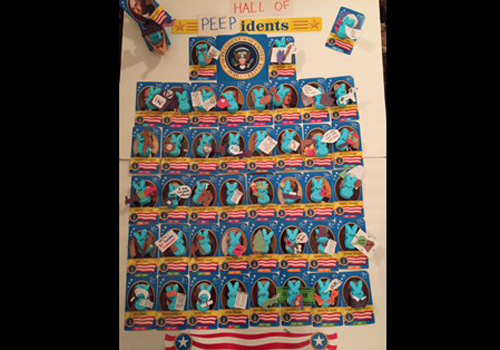 Caption: Amy Vasquez, Esq., and 6-year-old daughter Marcy Fiorentino have researched the U.S. presidents and created a tribute of sorts to those that have fulfilled the role of Article II of the Constitution.
Did you know Martin Van Buren kept two pet tiger cubs at the White House? Please click on the virtual tour to see more. Hail to the Peeps!
Submitted by Amy Vasquez, Esq., and her daughter Marcy Fiorentino, 6

See all of this year’s submissions here.