16 success stories for ABA advocacy during the 115th Congress 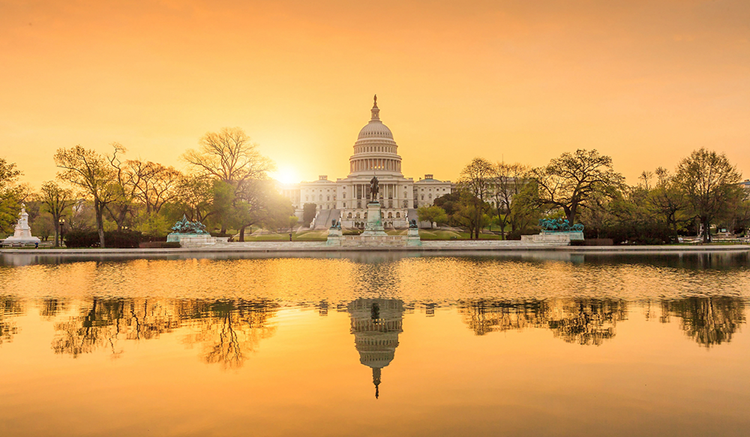 The passage on Friday of criminal justice reform measures like the First Step Act and the Juvenile Justice and Delinquency Prevention Reauthorization Act capped off a year of many lobbying successes by the American Bar Association. During the 115th Congress, the ABA successfully advocated on a number of legislation and policy issues that directly impact its members and the justice system.

The ABA is a non-partisan organization that makes no political contributions or endorsements. But its Washington, D.C.-based Governmental Affairs Office does conduct advocacy and grassroots lobbying to share the ABA’s position on issues affecting the rule of law and its members. Those positions are determined through votes by the ABA House of Delegates at the association’s annual and midyear meetings, and records of the association’s policy positions dating back through the 1960s can be seen here.

The ABA Board of Governors considers nine criteria to determine whether an issue should be made a priority during a particular legislative session: breadth and strength of ABA interest; importance to the practice of law; public perception of the profession; opportunity for impact; potential for achievement; timeliness of issue; expertise of lawyers on the issue; importance to society; and importance to the administration of justice.

The top achievements for the 2017-2018 Congressional session include:

• Enactment of criminal justice system improvements, an ABA priority, through the First Step Act. There are over 180,000 inmates in often-crowded federal prisons, yet many of these persons are non-violent offenders with lengthy sentences due to mandatory minimum sentencing laws. The First Step Act ends mandatory minimum sentences in appropriate cases and presents additional opportunities for model prisoners to transition to supervised release, sooner. The bill also included reauthorization of the Second Chance Act, which authorizes federal grants to state and local communities to provide assistance with jobs, housing, substance abuse treatment and other services that help those leaving prison make successful transition to productive members of their communities.

• Reauthorization of the Juvenile Justice and Delinquency Prevention Act (JJDPA), an ABA priority, which supports state and local juvenile justice planning and operations through grants, technical assistance, research, and program evaluation. The United States incarcerates non-violent young people at higher rates than in comparable nations, and youth of color are over-represented in the system. This new legislation strengthens protections for youth, particularly when held in adult facilities; focuses research on racial disparities in the juvenile system; and it includes measures intended to help reduce recidivism.

• Preservation of Legal Services Corporation funding, an ABA priority, anticipated at the current $410 million level for fiscal year 2019. The appropriations amount will allow the LSC to continue funding nearly 900 legal aid offices across the country in every congressional district as the “justice gap” continues to grow. A 2017 study revealed that 86 percent of low-income Americans receive inadequate or no legal help for their civil legal problems. Those helped by the LSC include disasters victims, veterans, domestic violence victims, rural residents, and those impacted by the opioid crisis.

• Enactment of pass-through tax relief provisions in tax reform act (P.L. 115-97) benefiting many law firm owners up to certain income thresholds. Those earning up to $315,000 per year (for married taxpayers filing jointly) or $157,500 per year (for single taxpayers) will be allowed to deduct 20 percent of the “qualified business income” they receive from pass-through entities. Although the ABA did not formally endorse this or any other specific tax reduction contained in the legislation, the ABA worked to ensure that law firms received the same benefits as other pass-through businesses.

• Defeat of mandatory accrual accounting proposals requiring many law firms to pay taxes on “phantom income” long before it is received from clients. The proposals would have forced law firms and other personal services businesses with annual gross receipts over $10 million to switch from the traditional cash method of accounting to the accrual method. The ABA worked with 30 state and local bar associations, dozens of law firms, and other coalition allies for over four years to protect the legal profession from the severe financial hardships that would have resulted had these provisions been enacted.

• Adoption of a new U.S. Customs and Border Protection border search policy that significantly increases protections for privileged client information contained on attorney laptops, cell phones, and other electronic devices. Under the new policy, border officers must consult with CBP senior counsels before searching any electronic devices allegedly containing privileged or work product protected material. CBP officers and counsels are also required to seek clarification from the individuals asserting privilege regarding the nature of the files to help CBP identify and protect the privileged information. CBP is required to segregate the privileged materials from other information on the device, and any copies of privileged materials maintained by CBP must be destroyed at the end of the review process absent certain exceptional circumstances.

• Reversal of previous changes to the Department of Labor “Persuader Rule” forcing many attorneys to report confidential client information to the government. The changes would have required attorneys who provide both legal advice to employer clients and engage in any persuader activities to file periodic disclosure reports even if they have no direct contact with the employees. These reports would have included disclosure of a substantial amount of confidential information, including the existence of the attorney-client relationship and the identity of the client, the general nature of the legal representation, and a description of the legal tasks performed. The reports also could have compelled disclosure of a great deal of confidential financial information about clients that is unrelated to persuader activities.

• Enactment of the Pro Bono Work to Empower and Represent Act of 2018 (POWER Act) (P.L. 115-237) to help victims of domestic violence gain access to pro bono legal services. The new law requires that the chief judge in each judicial district around the country host at least one public event annually to promote free legal services for victims and requires that, within the next four years, the chief judges must hold two of these events in areas with high populations of Native Americans and Alaska Natives.

• Preservation of the Department of Justice Legal Orientation Program (LOP) providing valuable information to individuals in immigration detention. This allows the ABA ProBar program to continue providing information orientations, workshops, and other presentations with LOP funding to thousands of immigrant detainees in South Texas and San Diego.

• Enactment of the Elder Abuse Prevention and Prosecution Act (P.L. 115-69) enhancing the federal government’s response to elder abuse and financial exploitation of seniors. The ABA supports the goals of the new law, which increases data collection and information-sharing of abuse and fraud cases, training of federal prosecutors and investigators, and penalties for criminals; and creates an elder justice coordinator in both the Federal Trade Commission and the Department of Justice.

• Enactment of improvements in the veterans’ appeals process (P.L. 115-55). The law creates a revised system to be implemented by the Veterans Affairs Department (VA) that is aimed at allowing claimants to request an immediate higher-level review by a regional office or to take advantage of a new streamlined docket. The law also places new burdens on the VA for providing medical evidence to support claims of particular wounds.

• Ratification of the Marrakesh Treaty to Facilitate Access to Published Works for Persons Who Are Blind, Visually Impaired, or Otherwise Print Disabled, and enactment of the Marrakesh Treaty Implementation Act (P.L. 115-261). The United States joins more than 30 other countries as party to the treaty, which requires them to permit reproduction of public works in accessible formats usable by individuals with a range of disabilities and to allow individuals and libraries to export and import works among the countries.

• Enactment of provisions requiring federal law enforcement agencies to upload information to the National Criminal Background Check System (NICS) and clarifying that the Centers for Disease Control and Prevention may conduct research on the causes of gun violence (P.L. 115-141). Grants will be provided to federal law enforcement agencies to help them upload information regarding criminal and mental health reports into NICS, and gun retailers will be required to check NICS before making a new gun sale.