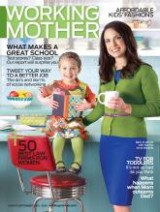 A bad economy may be hurting law firms, but it’s opening up more flex-time opportunities for male as well as female lawyers.

Working Mother magazine reports on the trend in a story accompanying its list of the top 50 law firms for women. Nearly all of its top 50 firms offer reduced-hour schedules, 62 percent offer full-time telecommuting and 42 percent have written flexible-schedule policies. Eight percent of the lawyers at the top firms work reduced hours, compared to 5 percent nationwide, the story says. And 20 percent of the equity partners at the top firms are female, compared to 16 percent nationwide.

Several large law firms on last year’s list didn’t make it this year, including one law firm that has since dissolved: Heller Ehrman. Two other law firms that missed this year’s list, Arnold & Porter and Bingham McCutchen, were on Fortune magazine’s list of 100 best places to work. Arnold & Porter also made a list of the nation’s 10 most family-friendly law firms compiled by Yale Law Women.

The story identifies these work-life strategies that its winning firms are using to “survive and thrive”:

• Reduced hours. At Minneapolis-based Lindquist & Vennum, lawyers can work only 60 percent of their usual schedule and still retain health benefits. The tactic is an alternative to layoffs. New York City-based Pillsbury Winthrop Shaw Pittman is also trying to keep jobs by switching lawyers in some practice groups to 90 percent schedules.

• Hourly paychecks. Law firms such as Pillsbury and Alston & Bird are paying some of its lawyer moms by the hour.

• Alternative billing: Law firms such as Orrick, Herrington & Sutcliffe are exploring alternatives to the billable hour.

• Pro bono. Some law firms are sending lawyers to nonprofits, while paying them less money, in an attempt to avert layoffs.

A press release lists the top 50 firms, along with their base location and number of lawyers. They are:

The list was based on a 2008 questionnaire of law firms with more than 50 lawyers that submitted applications to the magazine.