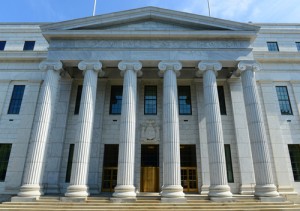 New York’s top court has upheld the removal of a village judge who had a physical altercation with a student worker and “used his office and standing as a platform from which to bully and intimidate.”

In an Oct. 20 opinion (PDF), the New York Court of Appeals rejected former judge Alan Simon’s request that his punishment be lowered to a censure and that he be restored to judicial office. The Legal Profession Blog has highlights of the opinion. The New City Patch and the Associated Press have stories.

According to the opinion, Simon engaged in bullying, “ethnic smearing and name-calling.” He used a sanction to punish a legal services organization for a perceived slight. He threatened to hold various employees and officials in contempt without cause or process. And he displayed poor temperament, most significantly by engaging in the physical altercation.

Previous findings by the New York Commission on Judicial Conduct provided more detail about the altercation. According to the commission, Simon was displeased because the mayor had hired, without his input, a college student to work in the court clerk’s office, and Simon didn’t want the student to be working with confidential documents.

Simon ordered the student employee to leave the office; the mayor told the employee to return. When Simon saw the student, he said he would issue a warrant for his arrest and asked multiple officers to make the arrest. They did not comply.

Simon then said he would arrest the student himself and began arraigning the employee. Simon grabbed the student’s forearm and tried to pull him out of the chair, according to the commission determination. At his ethics hearing, Simon said he only touched the student on his elbow.

Simon’s lawyer told AP his client is disappointed by the decision.