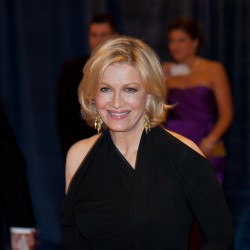 Diane Sawyer is one of the reporters named in the lawsuit. Rena Schild / Shutterstock.com

A producer of chemically treated cartilage and scrap meat can pursue a $1.2 billion defamation case against ABC and several correspondents for the network, including Diane Sawyer, over a series of 2012 broadcasts, the Supreme Court of South Dakota ruled on Thursday.

It declined to hear an interlocutory appeal of a ruling by Union County Circuit Judge Cheryle Gering. In denying motions to dismiss, it effectively affirmed her pretrial finding that the “entirety of the broadcasts can be reasonably interpreted as insinuating that plaintiffs are improperly selling a product that is not nutritious and/or not safe for the public’s consumption,” according to the Sioux City Journal and the Morning Mix page of the Washington Post (reg. req.).

At issue in the case is a food product termed “lean finely textured beef” by the plaintiff, Beef Products Inc., and “pink slime” by critics. Although considered safe to eat by the U.S. Department of Agriculture, as the ABC broadcasts noted, it was inaccurately portrayed by the network as “not meat,” lawyers for the company contended at a court hearing last year, reports the Associated Press.

The company is seeking damages for lost business, asserting claims of common-law disparagement and violation of South Dakota’s Agricultural Foods Products Disparagement Act, among other causes of action.

In addition to ABC and its correspondents, the suit also names as defendants a U.S. Department of Agriculture microbiologist who came up with the “pink slime” moniker, a former federal food scientist and a former employee who was interviewed by ABC.

Lawyers for the defendants could not immediately be reached for comment after the ruling, the AP article says.