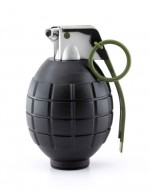 A trial in an anti-terrorism court in Pakistan was dramatically halted on Monday after the judge asked a police officer how an explosive—that authorities say they took from the defendant—worked.

Assuring the court that it had been defused, the officer pulled the pin on the grenade-like device. It went off, the judge was thrown from his chair and at least two people were injured, the police officer and a court assistant hit by shrapnel, according to the BBC News and the Guardian.

Meanwhile, others in the building who heard the explosion ran for their lives.

“We thought the whole building was under attack from terrorists,” attorney Farhan Haider, who had been in the adjacent courtroom, told the Guardian. “Everyone was just rushing towards the exits.”

It appears from news reports that no one was seriously injured and that the device, initially reported to be a live grenade, may simply have been a detonator.

A court official said the judge asked how the device worked following an argument by counsel for the unidentified defendant that it was too complex for his client to operate.