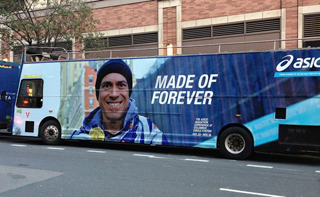 It all began with a photo taken by Eric Turkewitz’s 8-year-old son not quite two years ago.

The attorney, smiling broadly, holds up the medal he just received for completing the New York City Marathon in November 2010. Turkewitz included the photo in an off-topic post about the race in his New York Personal Injury Law Blog.

Turkewitz initially thought it was a joke when someone who ran across the post emailed him in August seeking permission to use the “inspirational” photo in an ad campaign for this year’s race. However, instead of following his first instinct and deleting the email as spam, Turkewitz replied. Soon he had negotiated a contract that paid a fee to his son, as the photographer, the lawyer explains in a Wednesday post.

At the end of last week, Turkewitz began to realize that his face was suddenly prominent in marathon ads around the city. First came a text from his niece about a photo of a billboard at the Time Warner Center, in Columbus Circle. “Am I crazy, or is this you?!” she wrote. The billboard photo, of course, was of a man with a big smile, holding up a finisher’s medal for the 2010 race. However, the photo now included a slogan: “Made of Forever.”

Similar ads, as Turkewitz soon heard, are on city double-decker buses and the entire back cover of the marathon edition of New York Road Runners magazine.

Since the ads don’t include his name or occupation, “anybody who sees the photograph that recognizes me already knows I’m a lawyer,” Turkewitz tells the ABA Journal. “So I can’t conceive of any actual benefit other than this just being a fun little quirk of life.”

Nonetheless, he’s enjoying his fleeting fame and, if he’s healthy on marathon day, will run in this year’s event.

Andy Warhol once said, Turkewitz notes in his blog post, “that everyone would be famous for 15 minutes. But it’s starting to look like I might get 16.”