Alan Dershowitz, a Harvard Law professor emeritus and a member of President Donald Trump’s impeachment defense team, acknowledges in a New York Times interview that most constitutional scholars disagree with his interpretation of “high crimes and misdemeanors.”

Dershowitz is preparing a presentation for the Senate on Friday that argues that impeachment requires both a crime and a violation of public trust, the New York Times reported Monday.

Democrats in the House of Representatives have approved two articles of impeachment against Trump.

One accuses Trump of abuse of power by holding up security assistance to Ukraine to pressure the country’s president to investigate former Vice President Joe Biden and his son. The second accuses Trump of obstruction of Congress by ordering witnesses to defy subpoenas for testimony and documents.

Dershowitz says he is relying on an argument presented by former Supreme Court Justice Benjamin Robbins Curtis when he defended President Andrew Johnson in his 1868 impeachment trial. Curtis had argued that Johnson was not accused of committing a legitimate crime, and impeachment would be a routine political tool if there is no crime.

“My argument will be very serious and very scholarly,” Dershowitz told the New York Times. “The fact that other scholars disagree, that’s for the Senate to consider. There is a division—most of the scholars disagree with me. I think they’re wrong.”

The New York Times spoke with some of the experts who disagreed with Dershowitz. Frank Bowman III, a University of Missouri law professor, has written a book on the topic.

The argument for a criminal requirement “is constitutional nonsense,” Bowman told the New York Times. “The almost universal consensus—in Great Britain, in the colonies, in the American states between 1776 and 1787, at the Constitutional Convention and since—has been that criminal conduct is not required for impeachment.” 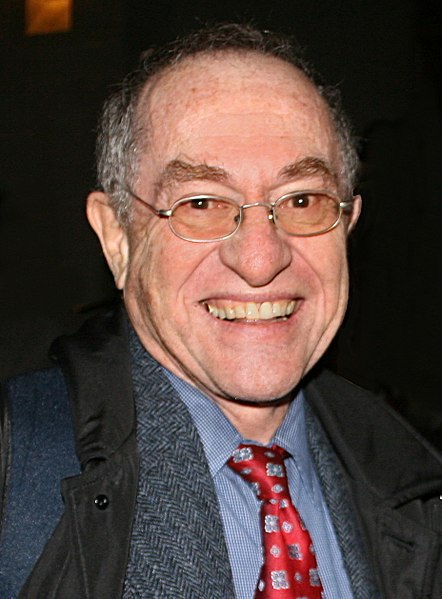 Alan Dershowitz in 2009. Photo by Sage Ross via Wikimedia Commons.

The original draft of the Constitution required treason or bribery for impeachment, according to the New York Times. During the convention debate, there was reference to an impeachment case reported in American newspapers against a former British governor-general in India accused of mismanagement, mistreatment of locals and military misconduct. The governor-general’s prosecutor argued that impeachment was authorized for violation of public trust.

One of the delegates at the constitutional convention argued that the impeachment requirement for treason or bribery had to be expanded to cover any similar cases. Delegates rejected the term maladministration and settled on the English phrase high crimes and misdemeanors.

Scholars also point to Alexander Hamilton’s description of impeachable conduct in the Federalist Papers. He said it included “those offenses which proceed from the misconduct of public men, or, in other words, from the abuse or violation of some public trust,” and “political” offenses that injure society.

Dershowitz, however, thinks Hamilton was arguing that impeachable conduct constitutes violations of the public trust that are also crimes.

Different lawyers for Trump also argued that a crime is required in a legal brief filed Monday, report CNN and the Washington Post.

“House Democrats’ newly invented ‘abuse of power’ theory collapses at the threshold because it fails to allege any violation of law whatsoever,” says the brief submitted by White House counsel Pat Cipollone and other lawyers.

Dershowitz did not sign the brief, and he told ABC News that he didn’t see it until after it was filed, the Washington Post reported.

The defense brief also argues that Democrats’ “obstruction of Congress” theory “is frivolous and dangerous. House Democrats propose removing the president from office because he asserted legal rights and privileges of the executive branch against defective subpoenas—based on advice from the Department of Justice. Accepting that theory would do lasting damage to the separation of powers.”

Democrats countered that Trump’s lawyers are “dead wrong,” and the Constitution authorizes impeachment for presidents “who, like President Trump, abuse their power to cheat in elections, betray our national security, and ignore checks and balances.”