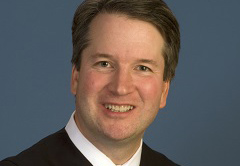 President Donald Trump announced on Friday that he has added five names to his U.S. Supreme Court shortlist, bringing to 25 the number of potential Supreme Court nominees.

Trump stuck to his list when he nominated Neil M. Gorsuch to the U.S. Supreme Court. Now there are five new judges on the list, though some are judicial newcomers, according to a White House announcement and a story by the National Law Journal (sub. req.).

One of the new names on the list is Judge Brett Kavanaugh of the U.S. Court of Appeals for the District of Columbia Circuit. Like Gorsuch, Kavanaugh is a former clerk to Justice Anthony M. Kennedy, who has been the subject of retirement rumors. Some had speculated that Trump nominated Gorsuch to assuage any of Kennedy’s doubts about the quality of a possible successor should he decide to retire.

Kavanaugh was an assistant and staff secretary to former President George W. Bush, and a former partner at Kirkland & Ellis, according to his court bio.

There are two other federal appeals judges on the new list; both were nominated to their appellate positions in May.

One of those judges is Kevin Newsom of the Atlanta-based 11th U.S. Circuit Court of Appeals, a former Alabama solicitor general. Newsom formerly clerked for Justice David H. Souter. He was confirmed to the 11th Circuit on Aug. 1.

The other is Amy Coney Barrett, who was confirmed Oct. 31 to the Chicago-based 7th U.S. Circuit Court of Appeals. She is a former Notre Dame law professor who had clerked for Justice Antonin Scalia. During her confirmation hearings, she came under fire for an article calling Roe v. Wade an “erroneous decision,” the Huffington Post reported.

• Britt Grant of the Georgia Supreme Court, a former Georgia solicitor general and a former partner at Kirkland & Ellis. She formerly clerked for Kavanaugh.

Carrie Severino, chief counsel and policy director of the conservative Judicial Crisis Network, issued a statement saying the new judges on the list “have spent years in the trenches of state and federal government fighting for the Constitution and the rule of law.”