Trump lawyer says he drafted president's Flynn tweet, and it did not admit obstruction 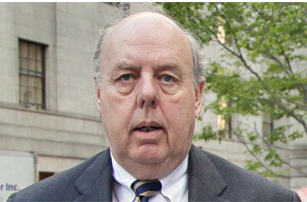 John Dowd, a lawyer for Donald Trump, says he drafted the president’s tweet on Saturday saying that Trump had to fire former National Security Adviser Michael Flynn “because he lied to the vice president and the FBI.”

Some have suggested the tweet could increase Trump’s legal exposure because knowledge that Flynn lied to the FBI could be a motive for any alleged attempt to obstruct justice by firing Director James Comey, the Washington Post reports.

A person close to the White House characterized the tweet as “a screw-up of historic proportions,” according to the Post. Trump had previously said he fired Flynn because he lied to Vice President Mike Pence about his contact with then-Russian Ambassador Sergey Kislyak.

Dowd told Axios in an interview that the “tweet did not admit obstruction. That is an ignorant and arrogant assertion.”

Dowd said the president “cannot obstruct justice because he is the chief law enforcement officer under [the Constitution’s Article II] and has every right to express his view of any case.”

Comey had testified that Trump told him before his firing “I hope you can see your way clear to letting this go, to letting Flynn go. He is a good guy. I hope you can let this go.” Trump denied that assertion in a tweet on Sunday. “I never asked Comey to stop investigating Flynn,” Trump said. “Just more Fake News covering another Comey lie!”

Flynn pleaded guilty on Friday to making false statements to the FBI about his conversations with Kislyak about U.S. sanctions against Russia and a United Nations vote on Israeli settlements.

Trump’s full tweet said: “I had to fire General Flynn because he lied to the vice president and the FBI. He has pled guilty to those lies. It is a shame because his actions during the transition were lawful. There was nothing to hide.”

Dowd told ABC News and NBC News that he is “out of the tweeting business” and he didn’t intend to make news. He told NBC that he dictated the tweet to the president’s social media director to publish.

Dowd said Trump only knew that Flynn’s statements to the FBI were the same ones he gave to Pence, and that the Justice Department “was not accusing him of lying.” Dowd elaborated in an interview with the Washington Post.

“For some reason, the [Justice] Department didn’t want to make an accusation of lying,” Dowd said. “The agents thought Flynn was confused.”