The case involves a claim of executive privilege asserted by the White House under Bill Clinton during an independent counsel investigation of former Agriculture Secretary Mike Espy, report the Wall Street Journal and USA Today. Espy was later acquitted of corruption charges in the case.

The 1997 opinion by the U.S. Court of Appeals for the D.C. Circuit could provide leverage to Trump’s lawyers as they seek more favorable terms for a voluntary interview by the president.

The independent counsel investigating Espy had sought documents used in a report compiled by the White House counsel. The D.C. Circuit ruled that executive privilege applied to the president and to his advisers. Prosecutors who want to overcome the privilege must show the materials sought contain important evidence that isn’t available elsewhere, the appeals court said. 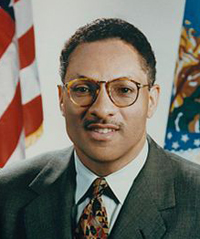 If Trump were to decline a voluntary interview, the special counsel could issue a subpoena seeking the president’s testimony. Trump could then cite the Espy case to fight the subpoena, though the privilege would apply only to his actions as president, according to lawyer Todd Presnell, a privilege expert who spoke with the Wall Street Journal.

Trump could also assert the Fifth Amendment, but that would be “a public-relations nightmare,” Presnell said.

Trump told reporters last week that he is looking forward to testifying “under oath” in the special counsel probe, though any interview would be “subject to my lawyers, and all of that.”

The special counsel reportedly wants to interview Trump about his firing of FBI director James Comey as part of an investigation into Russian influence and possible obstruction of justice.