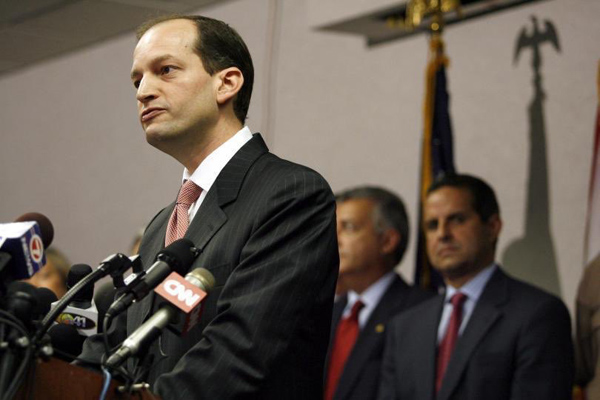 Trump chose Acosta after the withdrawal of his first choice for the cabinet position, fast-food chief executive officer Andrew Puzder, report the Washington Post, the Sun Sentinel and the Miami Herald.

Acosta is Trump’s first Latino cabinet nominee. According to the Miami Herald, Acosta “not only boasts stellar conservative credentials but is recognized as a political pragmatist.”

Acosta is a former U.S. attorney in Miami who served on the National Labor Relations Board in the Bush administration and headed the civil rights section in the Department of Justice. He has a Harvard University law degree and is a former clerk for Justice Samuel A. Alito Jr., Trump said in his announcement.

Acosta also is the chair of the ABA Commission on Hispanic Legal Rights & Responsibilities. ABA President Linda A. Klein of Atlanta offered her congratulations to Acosta in a tweet on Thursday.

The president of the Hispanic National Bar Association, Pedro J. Torres-Díaz, also publicly congratulated Acosta. “As dean of one of the most diverse and successful law schools in the nation, Mr. Acosta understands that our nation’s diversity is our strength,” Torres-Díaz wrote in a press release. “The HNBA has previously recognized Dean Acosta’s work to ensure all Americans regardless of race, ethnicity, or background are free to exercise their legal and constitutional rights. Today’s nomination demonstrates that diversity does not come at the expense of highly skilled and experienced candidates for this presidential cabinet.”

Updated at 2:45 p.m. to add comments from the president of the Hispanic National Bar Association.