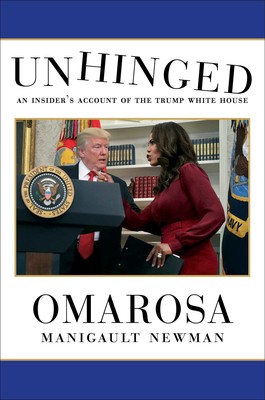 Lawyers for the Trump Organization have dispatched a letter to the publisher of Omarosa Manigault Newman’s tell-all book, Unhinged: An Insider Account of the Trump White House.

The letter claims publication of the book amounts to tortious interference with Manigault Newman’s nondisclosure agreement with the Trump Organization, according to the Hollywood Reporter, which obtained a copy. California libel lawyer Charles Harder, who represented Hulk Hogan in his successful privacy lawsuit against Gawker, signed the Aug. 13 letter to Simon & Schuster. The book was released the next day.

According to the letter, Manigault Newman’s contract bars disclosure of confidential information that is detrimental to the Trump Organization, Donald Trump and any Trump family member.

The agreement also bars Manigault Newman from demeaning or disparaging the company, Trump and Trump’s family members, according to the letter.

The letter advises Simon & Schuster that the Trump Organization will have claims against the publisher if it publishes the book, including claims for tortious interference with the confidentiality agreement and inducement of Manigault Newman to breach the agreement.

A lawyer for Simon & Schuster, Elizabeth McNamara at Davis Wright Tremaine, responded to Harder in a letter also obtained by the Hollywood Reporter. “My clients will not be intimidated by hollow legal threats,” she wrote.

McNamara said the purpose of the book is to inform the public. Private contracts like the nondisclosure agreement can’t be used to censor former or current government officials from speaking about nonclassified information learned in the course of their employment, McNamara wrote.

She notes that Harder’s letter also sought the preservation of evidence, and said the Trump campaign has its own obligation to preserve documents relating to any matters reported in the book. The letter raises the prospect of discovery of White House documents.

If there is litigation, McNamara writes, documents possessed by Trump, his family members, his businesses, the campaign and his administration “will prove particularly relevant to the defense.”

Harder also tried to stop the release of the book Fire and Fury: Inside the White House. Harder had claimed the book included false statements that give rise to claims for defamation and false light invasion of privacy.

Harder’s letter to the Fire and Fury publisher also cites an agreement with the Trump campaign that was signed by Steve Bannon, one of the book’s sources. The letter said the agreement bars disclosure of confidential information and disparagement about Trump, his family members, their businesses and the campaign.

The letter also said Bannon’s agreement with the campaign bars “communicating with any members of the print or electronic media about Mr. Trump, or any of his family members, or any of their businesses, or the campaign.”