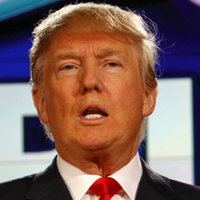 GOP presidential candidate Donald Trump has released a list of 11 people he would consider for nomination to the U.S. Supreme Court to fill the seat vacated by the death of Justice Antonin Scalia.

The list, published by the Associated Press, includes five state supreme court justices, the Washington Post reports. The other names on the list are judges on federal appeals courts.

Several judges on the list are “typically found on conservative wish lists,” including Judge Diane Sykes of the Chicago-based 7th U.S. Circuit Court of Appeals and Judge William Pryor of Atlanta-based 11th U.S. Circuit Court of Appeals, the Hill reports. According to Josh Blackman’s Blog, all the judges on Trump’s list “embody a deep respect for originalism,” the theory espoused by Scalia.

Bloomberg News points out that the list “is heavy on jurists from the middle of the country.”

One of the state judges on the list, Justice Don Willett of the Texas Supreme Court, has more than 37,000 followers on Twitter and has been described as “probably the most avid judicial tweeter in America.”

Some of Willett’s tweets have poked fun at Trump, according to TPM Livewire, which reproduces several of them. One of them reads: “We’ll rebuild the Death Star. It’ll be amazing, believe me. And the rebels will pay for it. —Darth Trump.”

Bloomberg News points to a tweet by Willett last year in which he wrote, “Who would the Donald Name to #SCOTUS? The mind reels. weeps—can’t finish tweet.”

Who would the Donald
Name to #SCOTUS? The mind reels.
*weeps—can't finish tweet* pic.twitter.com/a326AP0mN1