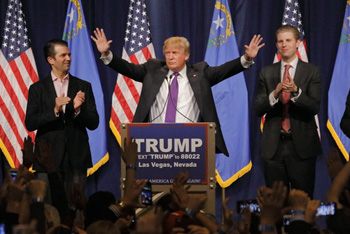 Updated: Advisers to President Donald Trump fear he could face legal jeopardy for allegedly drafting a misleading statement about Donald Trump Jr.'s meeting with a Russian lawyer, according to published reports.

Multiple sources tell the Washington Post that Trump dictated the statement on behalf of his son that said the June 2016 meeting was primarily about the adoption of Russian children. ABC followed with its own story about Trump’s involvement, based on two senior level sources.

The full statement drafted for Trump Jr. read: “We primarily discussed a program about the adoption of Russian children that was active and popular with American families years ago and was since ended by the Russian government, but it was not a campaign issue at the time and there was no follow up.”

Trump Jr. later released emails showing he was told he would receive damaging information about Hillary Clinton at the meeting. The emails indicated Trump Jr. would receive documents with high-level information that was part of the Russian government’s support for Trump.

According to the Washington Post, advisers worry Trump’s involvement in the statement “leaves him needlessly vulnerable to allegations of a cover-up.”

The Post article points out that misleading the public and the media is not a crime. But advisers fear any indication that Trump was trying to hide his campaign’s contact with Russians would draw additional scrutiny from special counsel Robert Mueller as he looks into possible obstruction of justice.

Lawyers had initially planned to reveal details of the meeting before the story broke, characterizing the meeting as a possible setup by Democrats, according to the Post. But Trump overruled the consensus that there needed to be transparency.

White House press secretary Sarah Huckabee Sanders said on Tuesday that the president had “weighed in” on the statement by Trump Jr., and it was true, CNN reports. “There’s no inaccuracy in the statement,” Sanders said. “The president weighed in as any father would, based on the limited information that he had.”

Sanders said Democrats are using the issue as a publicity stunt, and the matter is “of no consequence.”

Trump lawyer Jay Sekulow used the “no consequence” phrase in this statement about the Post article: “Apart from being of no consequence, the characterizations are misinformed, inaccurate, and not pertinent.”

Trump Jr.’s lawyer, Alan Futerfas, told the Post that he had no evidence to support the theory that Trump had intervened. Drafting a statement, he said, is “a communal situation that involved communications people and various lawyers.”

Updated at 3:25 p.m. to include statement by the White House press secretary.