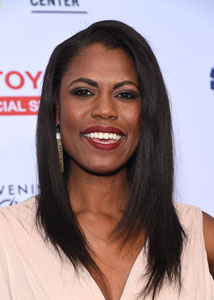 Updated: President Donald Trump's presidential campaign is reportedly seeking arbitration for violation of a 2016 nondisclosure agreement signed by Omarosa Manigault Newman, who has been promoting her new tell-all book about the Trump administration.

The arbitration alleges Manigault Newman signed the agreement when she joined the 2016 campaign, according to an anonymous campaign official who spoke with the Washington Examiner, CNBC and the Washington Post.

The campaign maintains that the 2016 agreement remains in effect. The request for arbitration was reportedly filed with the American Arbitration Association in New York City.

Trump tweeted Monday that “Wacky Omarosa already has a fully signed” nondisclosure agreement, the Washington Post reports. His tweet followed Manigault Newman’s claim that she was offered a $15,000-a-month job with the Trump re-election campaign after being fired from her White House communications position last December. The job required her to sign a nondisclosure agreement, Manigault Newman said.

Trump’s tweet spurred whistleblower Mark Zaid to make a Twitter offer to represent anyone wishing to challenge such agreements without charge.

Zaid tweeted that requiring nondisclosure agreements is “inappropriate and likely unconstitutional.” He also told USA Today he didn’t believe any law could “reasonably and practically be applied” to her secret taping of her firing.

A story published by the Washington Post on Monday reports that nondisclosure agreements have not been widely used by past presidents outside of the transition time before inauguration, partly because such agreements were not believed to be enforceable against public employees.

The Washington Post and the New York Times had reported in March that senior White House staff members were required to sign such agreements after Trump became angry about media leaks. A draft copy obtained by a Post columnist imposed $10 million penalties, payable to the federal government, for unauthorized revelation of confidential information. The Post thought it unlikely that such a huge penalty was in the final agreement; the White House released a statement to Reuters that said staffers “were never asked or required to sign NDAs with $10 million clauses.”

According to the Times, White House counsel Don McGahn had reportedly drawn up the nondisclosure agreement to placate Trump, and people who signed the agreements said McGahn had made clear that the terms couldn’t be enforced. The Times said the agreement did not specify any financial penalties for a violation, and it contained whistleblower protections. The earlier agreement obtained by the Post had been circulated before the inauguration and was ridiculed as a misguided tactic by the president’s personal lawyers, the Times said.

Norm Eisen, the top ethics lawyer in the White House Counsel’s office during the Obama administration, raised questions about the constitutionality of such agreements in an interview with the Times. “If they have taken even baby steps—much less what appear to be giant strides—into the area of muzzling the normal, permitted recollections about the nonclassified and nonconfidential aspects of White House service, then that’s going to trigger the First Amendment protection,” he said.

Articles by Reuters and USA Today, also published in March, quoted experts who agreed that broad nondisclosure agreements would be unenforceable because of the First Amendment.

A public employee “can’t be forced to sign away the right to speak,” said Mark Fenster, a University of Florida Levin College of Law professor, in an interview with Reuters.

But Reuters points out that the Supreme Court has ruled that public employees can be fired or disciplined for speech connected to their jobs. Another Supreme Court decision upheld pre-publication clearance for material published by former staff members who worked with classified information.

Experts, meanwhile, are debating whether Manigault Newman is in legal jeopardy for taping her firing in the White House situation room. Zaid told USA Today that a Watergate-era law against misappropriating a government “record” could apply, but he doubts the government would pursue a case.

However, Trump’s personal lawyer, Rudy Giuliani, told Fox & Friends that Manigault Newman is “certainly violating national security regulations, which I think have the force of law.”

It's entirely inappropriate & likely unconstitutional to require Fed employees to sign NDA that applies post-employment beyond classified info. We'll rep anyone who has signed & wishes to challenge such agreement pro bono.

Story updated at 11:44 a.m. to report on arbitration bid.