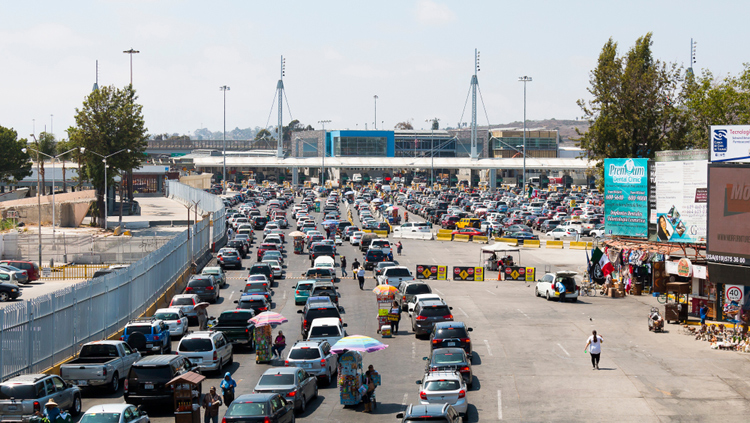 Cars wait in long lines in this June 2018 photo of the San Ysidro Port of Entry. (Photo from Shutterstock.com)

President Donald Trump threatened to permanently close the Southern border on Monday, a day after U.S. Customs and Border Protection used tear gas on migrants at a border crossing leading to San Diego. "We will close the Border permanently if need be," Trump tweeted.

The San Ysidro Port of Entry between San Diego and Tijuana was closed for more than six hours on Sunday after a demonstration by hundreds of people, some of whom rushed toward the border. Mexican police erected metal barriers while CBP officers fired tear gas, the New York Times reports. Some of the migrants in the tear-gassed area were families with small children.

The closure caused gridlock at one of the world’s busiest international crossing, the San Diego Union Tribune reports. In addition to being a major port for trucks carrying goods, people routinely commute back and forth between the two cities.

Trump said some of the migrants are “stone cold criminals” and Mexico should send them to their home countries, report Politico and NBC News. “Do it by plane, do it by bus, do it anyway you want, but they are NOT coming into the U.S.A.,” Trump tweeted.

Trump’s tweet threatening to close the border followed his Saturday tweets announcing what appeared to be a tentative deal in which asylum seekers must wait in Mexico while their claims are processed in U.S. courts.

No formal agreement has been signed, and Olga Sánchez Cordero, Mexico’s incoming interior minister, gave conflicting statements about the supposed deal. At first she told the Washington Post that the deal is a short-term solution. Later, however, she said that “there is no agreement of any sort” and talks with the United States are ongoing.

The New York Times reported on Saturday that there is no deal yet, but talks are underway.

The asylum seekers have been sent to San Diego, where the new procedures are being implemented, according to the Washington Post. Here is how it would work: Asylum seekers at the port of entry would be given an interview to determine whether they have a credible fear of persecution in their home countries. If an asylum seeker is deemed to have a credible fear, he or she would wait in Mexico for a court date with an immigration judge, a process that can take months or years.

U.S. immigration officers would escort the person to court, and if there is no immediate decision by the judge, the person would be returned to Mexico. When a claim is denied, the asylum seeker would be held in the United States until he or she was deported to his or her home country.

Lee Gelernt, director of the Immigrants’ Rights Project of the American Civil Liberties Union, told the Washington Post that a wait-in-Mexico policy could trigger legal challenges. “The administration ought to concentrate on providing a fair and lawful asylum process in the U.S. rather than inventing more and more ways to try to short-circuit it,” Gelernt said.

Mexico should move the flag waving Migrants, many of whom are stone cold criminals, back to their countries. Do it by plane, do it by bus, do it anyway you want, but they are NOT coming into the U.S.A. We will close the Border permanently if need be. Congress, fund the WALL!

Migrants at the Southern Border will not be allowed into the United States until their claims are individually approved in court. We only will allow those who come into our Country legally. Other than that our very strong policy is Catch and Detain. No “Releasing” into the U.S…

….All will stay in Mexico. If for any reason it becomes necessary, we will CLOSE our Southern Border. There is no way that the United States will, after decades of abuse, put up with this costly and dangerous situation anymore!