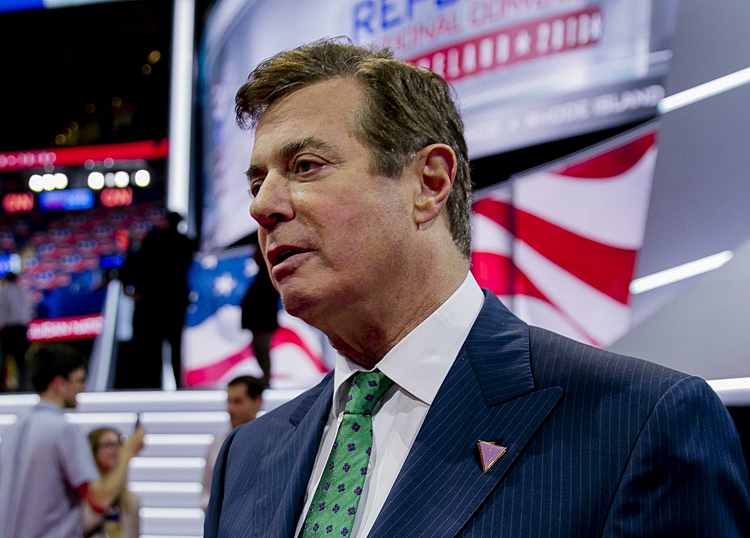 Manafort and his former business associate, Rick Gates, have both been charged in a 12-count indictment, report the Washington Post and the New York Times. Manafort served as Trump’s campaign chairman for three months in 2016 before he was forced to resign. Manafort and Gates have surrendered to authorities.

The indictment (PDF) claims Manafort and Gates generated tens of millions of dollars in income as a result of work for former Ukrainian president Viktor Yanukovych, and then laundered the money through scores of U.S. and foreign corporations, partnerships and bank accounts. Yanukovych was supported by Russia, and he fled there after his ouster in 2014.

Manafort and Gates are charged with conspiracy against the United States, conspiracy to launder money, failing to file required reports on foreign bank accounts, making false statements to the Justice Department, failure to register as an agent for a foreign government, and making false statements in foreign registration documents. The money laundering began in about 2006 and lasted through at least 2016, according to the allegations.

The indictment alleges that Manafort and Gates directed a campaign to lobby U.S. officials on behalf of the former government of Ukraine, but did not report their work as required by law. “In furtherance of the scheme,” the indictment says, “Manafort used his hidden overseas wealth to enjoy a lavish lifestyle in the United States, without paying taxes on that income.”

Manafort obtained the money after it was wired from offshore nominee accounts to U.S. vendors, the indictment says. He used the money to buy multimillion-dollar properties in the United States, which were used as collateral for loans. Manafort defrauded financial institutions to obtain the loans at more favorable rates, the indictment alleges.

Gates also used money from offshore accounts for personal expenses, including his mortgage and tuition for his children, according to the allegations. The indictment describes Gates as Manafort’s “right-hand man,” and says he worked for two political-consulting companies created by Manafort.

As part of the scheme, Manafort and Gates provided false information to lawyers, accountants and bookkeepers, the indictment says.

Manafort and Gates lobbied Congress about the validity of Yanukovych’s election and the propriety of his imprisonment of a rival, former Prime Minister Yulia Tymoshenko, according to the indictment. Gates and Manafort used money from one of their offshore accounts to funnel $4 million to pay secretly for a report about the validity of the rival’s trial, the indictment says.

The indictment does not name the two companies hired by Manafort to lobby Congress, and does not provide information about what entity prepared the report or how much money it received.

A story published by the New York Times in September says Skadden, Arps, Slate, Meagher & Flom had drafted a report that some had cited to justify the jailing of Tymoshenko.

The Skadden report said Tymoshenko was denied counsel at critical stages of her trial but her conviction was supported by evidence. Skadden’s lead lawyer on its Ukrainian work was Greg Craig, former White House counsel in the Obama administration.

Manafort’s home was searched this summer, and he was previously wiretapped as a result of the FBI investigation into consulting firms’ work for Yanukovych, according to a CNN story published in September that was based on anonymous sources. Ukraine’s general prosecutor has accused Yanukovych of embezzling state funds.

Updated at 1:20 pm. to report that Manafort and Gates pleaded not guilty.