Trump's VP pick practiced law at a small firm; he wouldn't wish law school 'on a dog I didn't like' 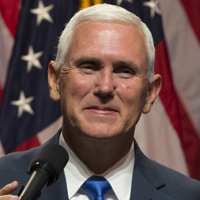 Pence graduated from Indiana University’s Robert H. McKinney School of Law in 1986, but he didn’t enjoy his time there, he told the Indianapolis Business Journal in 1994 in a story (PDF) noted by the Wall Street Journal Law Blog.

“No one I know likes law school. It was a bad experience. I wouldn’t wish it on a dog I didn’t like,” he told the Indianapolis Business Journal.

Name partner Brian Tuohy told Bloomberg that the firm probably had about six partners and four associates when Pence was there, and he only stayed a couple of years. “He was a very polite, pleasant, nice gentleman,” Tuohy said of Pence.

The 1994 story said Pence practiced corporate law, but Tuohy and name partner Patricia Bailey say that didn’t reflect the reality of practice at the law firm. “Philosophically, the firm took the approach that you do a little bit of everything” as an associate, Bailey told Bloomberg News.

Pence is a 1981 graduate of Hanover College, which has details of his political career here.