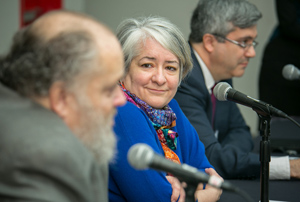 Professor Leticia Saucedo (center) was one of the speakers at the 2015 ABA Midyear panel “The Pros and Cons of the Exercise of Executive Action in Immigration Law”. (Photo by Kathy Anderson.)

In fact, the morning panel on “The Pros and Cons of the Exercise of Executive Action in Immigration Law” looked specifically at executive action. This includes not only the 2012 Deferred Action on Childhood Arrivals program, but its expansion announced in November, Deferred Action for Parents of Americans and Lawful Permanent Residents. DACA benefited undocumented young adults brought to the U.S. as children; DAPA will, for the most part, benefit undocumented members of mixed-status families.

Panelists agreed that the president clearly has the authority to take these executive actions. Professor Leticia Saucedo of the University of California at Davis School of Law said multiple presidents have used executive action to defer deportation—John Lennon of the Beatles was one high-profile beneficiary—or parole immigrants into the United States. But the president might get into trouble, she said, if his orders are seen as suspending existing law.

Claims like that are currently pending in the courts. Professor Michael Olivas of the University of Houston Law Center counted six direct challenges to DACA, all unresolved. A lawsuit from unhappy DHS employees, Crane v. Napolitano, is currently in the 5th U.S. Circuit Court of Appeals.

Thomas Saenz, president and general counsel of the Mexican American Legal Defense and Education Fund, said it’s a problem that some DHS officers aren’t happy with the executive actions. Some have openly defied them, he said—and policies could well change in two years, when the next president arrives. Though congressional action would be the best solution, Saenz said, it may not be possible.

On the other hand, panelists agreed even a Republican-controlled Congress is unlikely to repeal or defund DACA and DAPA; the president has a veto and the GOP may not want the bad publicity of shutting down DHS. Olivas thinks there’s no going back now that DACA young adults are known to authorities.

“It’s almost like Star Trek, when you make the hyperspace jump,” he said. “That’s what happened here.”

Olivas also spoke at an afternoon panel sponsored by the American Bar Foundation, “Communities in Crisis: The Effects of Immigration Law and Politics on American Communities.” After discussing the pending DACA and DAPA cases, he added that occupational licensing cases—such as Sergio Garcia’s successful quest for admission to the California State Bar—are “where the real action is going to be.”

That panel also included a presentation by Christina A. Fiflis, chair of the ABA Commission on Immigration and co-chair of the ABA’s Working Group on Unaccompanied Immigrant Minors, created by ABA President William C. Hubbard in response to the “surge” of unaccompanied children and teens arriving at the border last year. Fiflis explained the sobering facts of how minors come to the border alone; the system the United States has made for them; and what the Working Group is doing “to make the legal process not as arduous” for them.

Two sociology professors presented their research on immigration. Assistant Professor Patrisia Macias-Rojas of the University of Illinois at Chicago, a visiting scholar with the ABF, discussed her research with Customs and Border Patrol officers near Tucson, Arizona. Macias-Rojas’ research looked at reasons CBP arrests often reverse the president’s stated priorities for immigration enforcement. And Jamie Longazel of the University of Dayton, a former ABF Fellow, discussed his in-depth research on the politics of immigration in Hazelton, Pennsylvania.

Ana Kocur, deputy director of the Justice Department’s Executive Office for Immigration Review, also gave a presentation about the immigration courts’ response to the “surge” of unaccompanied minors. This included a plea for more pro bono attorneys in immigration court, where nobody—even minors—is legally entitled to a public defender.

Olivas also ended his talks with a call for lawyers to get involved in immigration issues. And he praised the ABA’s efforts on unaccompanied minors.

“These are refugee and asylum claims” that the minors have, he said. “I’m so proud that the ABA is getting on this.”