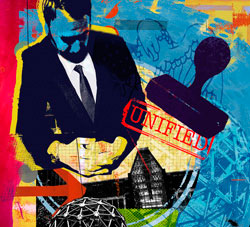 On May 3, the U.S. Patent and Trademark Office put a new set of ethics rules into effect. The new rules have drawn some criticism from attorneys, but at least no one can accuse the PTO of acting in undue haste.

“Since then, a lot has changed in the way we practice law,” says Michelle Greer Galloway, who is of counsel at the Cooley law firm in Palo Alto, Calif. She chairs the Ethics and Professional Responsibility Committee in the ABA Section of Intellectual Property Law. Galloway says the Model Rules, which have undergone numerous revisions since they were first adopted 30 years ago, reflect the changing realities of law practice. The Model Rules are the direct basis for professional conduct rules for lawyers in every state (and the District of Columbia) except California, which still follows a version of the Model Code.

The PTO now is catching up with the rest of the legal profession. By basing its new Rules of Professional Conduct on the ABA Model Rules, the office is bringing its ethics standards into line with the modern practice of law and harmonizing them with the ethics rules adopted by nearly all U.S. jurisdictions.

“This is a very positive development. It makes it easier for patent lawyers to know what their ethical obligations are and to avoid inconsistencies with other jurisdictions,” says Sean M. SeLegue, a partner at Arnold & Porter in San Francisco and a vice-chair of the Intellectual Property Law Section’s ethics committee.

There is wide agreement that the PTO should have revised its ethics rules long ago. “Admittedly, this move is overdue,” wrote David J. Kappos, then the office’s director, in an October 2012 blog post. Kappos left the post Feb. 1. A few days later, he was named a partner at Cravath, Swaine & Moore in New York City.

Click here to read the rest of “A New Recruit” from the July issue of the ABA Journal.</i/>