U of Illinois Law School Is Publicly Censured by the ABA, Fined for Misreporting Admissions Data 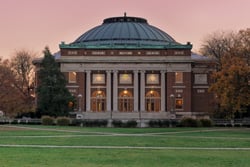 The University of Illinois College of Law has been publicly censured and fined $250,000 for intentionally reporting and publishing false admissions data in six out of the last 10 years.

The action, taken last month, was announced Tuesday by the Council of the ABA Section of Legal Education and Admissions to the Bar, which accredits law schools.

In addition to the public censure and fine, the law school must issue a public statement of correction to be distributed to all ABA-approved law schools; hire a compliance monitor to report on its admissions process and data for the next two academic years; and give up a variance that allowed it to conduct an early-admissions program.

The censure (PDF) explains that the monetary penalty is designed to address the harm done to the reputation and standing of legal education and the profession due to the school’s violation of accreditation standards. The proceeds are to be placed in a designated fund to be used to monitor and enhance compliance with the section’s data reporting and publication requirements.

The action follows the revelation last fall that the law school reported and/or published inaccurate LSAT scores and incoming student grade-point-average data for the entering class of 2005 and the entering classes of 2007 through 2011. The university, which launched an investigation into the matter after its ethics office was alerted to potential discrepancies in its admissions data for the class of 2014, blamed the inaccuracies on Paul Pless, the law school’s former assistant dean for admissions.

In its censure, the council said the school had used a June 2009 variance from the standards’ requirement that all students take a valid and reliable admissions test to implement an admissions program intended to recruit students who had not taken the LSAT. It said that Pless, a 2003 graduate of the school, was instrumental in the development and implementation of the program, which was designed primarily to improve the law school’s standing in U.S. News & World Report’s annual law school rankings.

The censure also faults the school for not adequately appreciating the connection between establishing aggressive recruiting goals; for placing authority for admissions decisions in a single person who stood to gain personally and professionally from meeting or exceeding its recruiting goals; and for not having effective internal controls or oversight mechanisms in place to prevent, deter and detect the manipulation of admissions data.

“No matter what the competitive pressures, law schools must not cheat,” it said. “The College of Law cheated.”

At a March hearing before the council, law school officials accepted all of the recommended sanctions except for the fine, which they argued was inconsistent with a previous case and out of proportion to the violations at issue.

But the council in its decision said that those violations “constitute substantial and persistent noncompliance” with the standards and concluded that a $250,000 fine, its first for a violation of the consumer information standard, was not disproportionate to the school’s misconduct.

Law school officials could not be reached for comment.