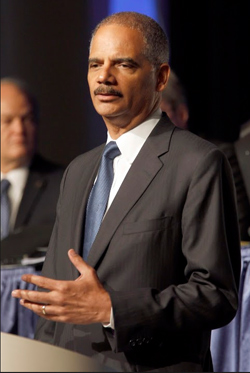 The blog post, from former site reliability engineer Susan Fowler Rigetti, alleges that Uber’s management repeatedly ignored well-documented instances of sexual harassment and sexism because the people being reported were high performers. When she continued to report incidents, she wrote, her boss threatened to fire her. By the time she found a new job, she wrote, Uber’s engineering department had dropped from more than 25 percent women to 3 percent women.

After the post went viral, Kalanick tweeted on Sunday that this behavior was “abhorrent and against everything we believe in” and pledged that Uber employees who behave this way would be fired. In his memo, Kalanick said Holder would lead an investigation into diversity and inclusion more broadly.

The incident comes shortly after Kalanick attracted criticism for joining an advisory group for President Donald J. Trump. Kalanick quit the group shortly thereafter. Uber also was criticized for continuing to provide rides to JFK Airport in New York City, the Post says, even though taxi drivers went on strike in solidarity with protesters. Both incidents sparked a social media campaign that called on users to delete their Uber accounts, which the Post says was renewed after Rigetti’s blog post.

Uber also has been the subject of criticism for discrimination by drivers, against racial minorities—especially African-Americans, whose problems hailing traditional taxis are well-documented—and disabled people. It has been sued several times by users of wheelchairs and guide dogs who were refused service in violation of disability rights laws.

Rigetti wrote that her supervisor made advances to her as soon as she joined his team, and she reported them, with screen shots that showed the conversation over a company chat app. But HR and upper management told her nothing would be done because it was a first offense, he was a good performer and it was probably an innocent mistake. They encouraged Rigetti to find a different team, which she did.

However, when she talked to other female engineers, she found that it was not the manager’s first offense and that many women had similar stories. But the HR department flatly lied when Rigetti confronted them, she wrote. Later, when she put in for a transfer, it was blocked because of “performance problems” that were nowhere in her performance reviews. The company later did downgrade her performance review, she says, without telling her, and in a way that hurt her prospects for advancement. When she persisted with the complaints, her supervisor threatened to fire her.

As the Post notes, sexism is an ongoing issue in the tech industry, where a high-profile lawsuit by former venture capital partner Ellen Pao alleged she lost her job for complaining about discrimination. (Pao lost the discrimination claim and dropped the appeal after the defendant, venture capital firm Kleiner Perkins Caufield & Byers, agreed to drop its claim for court costs if she didn’t appeal.) In early 2016, a small survey found that 60 percent of women surveyed had received unwanted sexual advances at work; 90 percent had witnessed sexist behavior; 75 percent had been asked about their marital status and children in job interviews; and 84 percent had been told they were “too aggressive.”