UK and US legal systems both sprung from the Magna Carta, but many jurisdictional differences exist 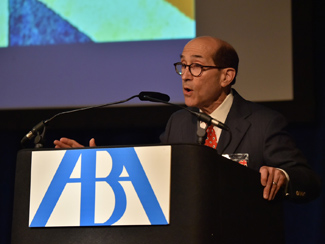 A major theme of the ABA London Sessions commemorating the 800th anniversary of the sealing of the Magna Carta is its effect in binding two of the leading common law jurisdictions in the world, the United States and the United Kingdom.

But underneath that sheen of commonality lies a whole world of legal and cultural differences between American legal professionals and their counterparts across the pond. In an afternoon session on Friday, a panel of eight American and British attorneys, judges and academics outlined several of the biggest differences. The panel, which was entitled “Where Would You Try a Case? A Live Action Primer on Trial Skills in the U.S. and United Kingdom,” was moderated by Robert Clifford, founding partner of Clifford Law Offices in Chicago and sponsored by the ABA Section of Litigation.

“Magna Carta eventually served as the foundation for the English system of common law,” Sandler said in his opening remarks. “Later generations of English citizens celebrated Magna Carta as a symbol of freedom from oppression, as would the Founding Fathers of the United States of America. They, in 1776, looked to the charter as a historical precedent for asserting their liberty from the English crown.”

Despite this shared bond forged by common words and phrases, the panelists emphasized that U.S. and U.K. law can be radically different, especially when it comes to litigation. For instance, McDermott pointed out that in the U.K., jury trials are rare in civil cases, while St. John-Stevens noted that jurors are picked at random, a revelation that surprised many of the American lawyers in the audience who are used to conducting extensive voir dire.

Another major divide concerns conflict of interest rules. In the U.K., barristers from the same chambers often appear against one another. In the U.S., for lawyers from the same firm to appear against each other is rare and nearly unheard of. Stewart and McDermott both stated that they were uneasy with the idea that the same chamber could represent both sides, and talked about the lengths they had to go to in order to avoid conflicts of interest.

“The idea that it might be a conflict used to be entirely brushed aside,” Stewart recounted. “However, clients are becoming a bit more concerned about this, especially in sensitive commercial matters. And I think they have a right to be concerned.”

From the U.S. perspective, Schofeld was blunt when it came to her rule for recusal: “If you eat dinner in my house, then you don’t appear in my courtroom.”

When it came to the impact of the Magna Carta, the U.S. and U.K. legal professionals agreed that what it stands for matters much more than what it actually says. Stewart, for instance, noted that there are very few instances where a lawyer will actually be able to cite it in an argument.

“One of my colleagues had a case against a litigant-in-person [a pro se party] and the litigant-in-person tried to cite the Magna Carta,” Stewart recalled. “The judge said: ‘That’s a terribly interesting and novel point, but I think, on the whole, perhaps we might focus on the boring old housing act.’”

Saltzburg agreed, noting that what was most important about the Magna Carta was that it established the rule of law.

“From Magna Carta to the present day, the rule of law is all about providing, to the extent we can, equal access, equal opportunity and equal justice,” he said.