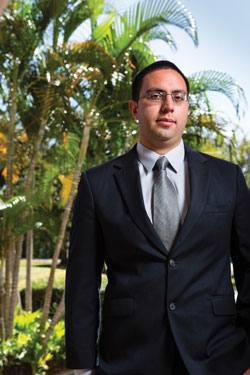 A Florida State University law graduate has won a deportation deferral and a work permit under the deferred-action program for young immigrants living in the U.S. without proper documentation that was started last year by the executive branch.

And that could help José Godínez-Samperio win a Florida Supreme Court ruling that he qualifies for a state license to practice law, CBS Miami reports.

The court, after hearing oral arguments in October, was waiting for the result of Godínez-Samperio’s deferred-action application before ruling in the case. He has also obtained a state driver’s license, he recently notified the court.

Godínez-Samperio came to this country with his family, on a visitor’s visa, when he was 9 years old, but never returned to Mexico. He has already passed the state bar exam.

ABA Journal: “The Dream Bar: Some Children Illegally Living in the United States Grow Up to Want to Be Attorneys”

ABA Journal: “Should Public Policy Favor Inclusion When It Comes to Bar Admissions?”