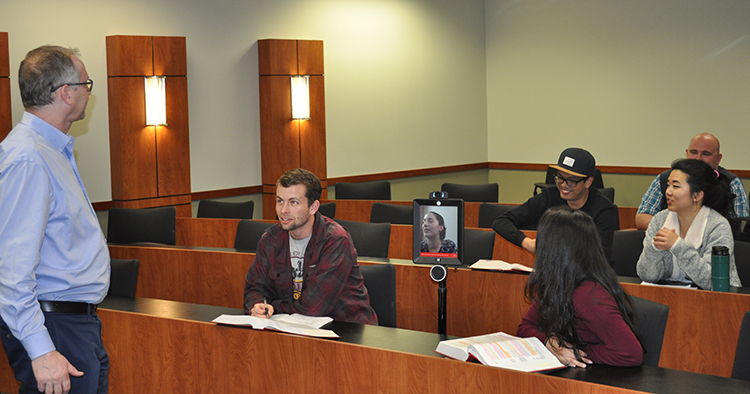 University of California at Irvine School of Law professor Rick Hasen teaching torts with Tess Messiha on the robot display in attendance.

A pregnant 1L at the University of California at Irvine School of Law used a robot to remotely attend her classes after being prescribed bed rest for the first three weeks of the spring semester.

The Double 2—the telepresence robot used by student Tess Messiha—gives its user total control over its movements. The user maneuvers it remotely through an application that also acts as a videoconferencing device.

“It’s very easy to understand,” said David Cann, a co-founder of Double Robotics. “It’s just an iPad on wheels, you know, Skype on wheels or FaceTime on wheels.”

During her bed rest, Tess Messiha controlled her Double 2 from her computer at home. Many of her classmates were shocked to see this technology being implemented in the classroom.

“The reactions of people were really funny,” she said. “When I moved it around, I scared a few people—they had no idea what was going on.” 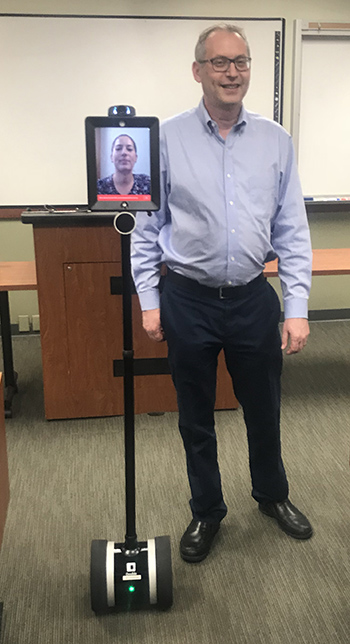 Hasen with Messiha on the robot display

But the robot quickly grew on students and professors for its capacity to allow Messiha to interact with the class.

“It was surprisingly natural to have Tess in the classroom via the mounted tablet,” said Messiha’s torts professor, Rick Hasen, in a news release. “I could make eye contact with her, call on her, and have the class hear her responses. For someone unable to attend class physically, this was definitely the next best thing.”

Although Messiha was initially nervous about how it would all work out, she ultimately had a very positive experience with the Double 2 and did not miss a single class during her bed rest.

“I was very pleasantly surprised at how far UCI was willing to go to help accommodate my situation,” she said. “Medical conditions arise sometimes, and you just never know how the school is going to handle it.”

Because her first child had been born prematurely, Messiha’s doctor put her on bed rest 32 weeks into her second pregnancy.

When she realized that this would cut into her spring semester, she immediately reached out to the university to figure out what her options were. She had thought she would either have to rely on lecture recordings or even take a leave of absence; she never knew about the Double 2 until the UCI Disability Services Center presented the option.

This isn’t a first for UCI; A nursing student remotely attended classes via a Double 2 last fall because of a disability that prevented her from being physically present. In fact, UCI’s Class of 2016 used their senior class gift to buy four of these telepresence robots for the university, which have also been used by PhD students to research the use of telepresence robots in K-12 education.

“I think it’s something that we’ll continue to have access to if there is a future need that arises,” said Somphone Eno, assistive technology manager at the UCI Disability Services Center. “We’re not advertising it as an accommodation for someone who just wants to go hang out at the beach and miss class—there has to be someone with a documented disability for which they are not physically able to attend class.”

Messiha was able to get off bed rest at 37 weeks and return to classes. She gave birth to her second son on Feb. 8 after almost 40 weeks of pregnancy.