Volunteers are wanted to transcribe justices' notes from SCOTUS conferences

The University of Minnesota and Michigan State University are crowdsourcing volunteers to help their academic research teams transcribe over 50,000 pages of handwritten notes from U.S. Supreme Court justices.

The National Law Journal had the story.

The project, named SCOTUS Notes, launched Feb. 13 and received 308 volunteers in its first six hours. It is the latest to be administered through University of Minnesota’s Zooniverse people-powered online research platform, the world’s largest of its kind. Zooniverse allows its 1.5 million users to act as “armchair scientists and archivists” who conduct their research from the comfort of their own homes.

The project’s initial focus is on more than 12,000 pages of notes taken by Justices Harry Blackmun and William Brennan Jr. in cases that were ruled on between 1959 and 1994, the National Law Journal reported.

“Help from the public is a crucial part of this project,” research team co-leader Ryan Black, an associate professor of political science at Michigan State University said in a press release. “It would have taken our small research team years to go through all of these data.”

These handwritten notes come from the private conferences in which the justices discuss and vote on the cases before them. Researchers place utmost importance on these notes because they are the only record of what has been said, and by whom, during these conferences.

“The end result of this project will enhance how lawyers, researchers, and the public understand both what went on behind the scene in these decisions and, more generally, how the most secretive of our three branches operates,” Black said in the release.

Those interested in volunteering for the SCOTUS Notes project can go to the website and scroll down to the middle of the homepage to the “Get Started” section. 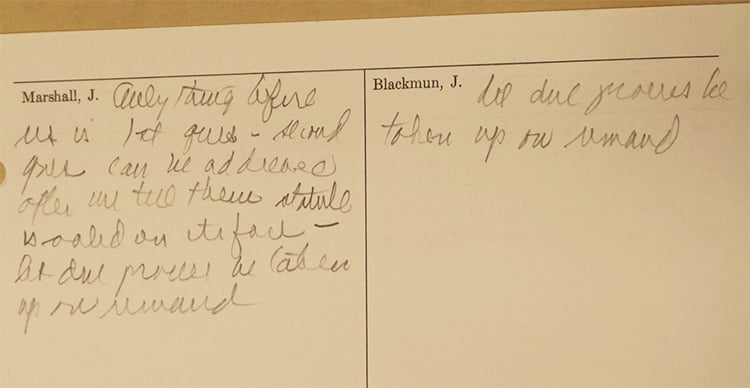