US Lags Well Behind Other Wealthy Nations on Rule of Law, Report Says 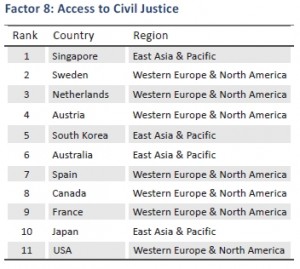 A U.S. justice system already pummeled by blows from the Great Recession is getting more bad news this morning.

A report released by the World Justice Project—a 3-year-old initiative sponsored by the ABA and a number of other organizations representing various disciplines—says the United States lags behind other leading developed nations on all but one of nine key measures of adherence to the rule of law. The findings for each country are based on surveys of some 1,000 residents in three leading cities as well as experts in the law and other disciplines.

The good news is that the U.S. ranks no lower than 11th among 35 countries covered by the index on any of nine key rule of law principles. But when compared with 10 other nations designated in the index as “high income,” the United States ranks near the bottom in nearly all of those categories.

Every major region of the world is represented in the index. Peer groups of nations are categorized by the index on the basis of socioeconomic factors and region, but not form of government.

Notably, the United States ranks at the bottom of both its 11-nation economic group and its seven-nation regional group (Western Europe and North America) on providing access to civil justice through the courts and representation by attorneys or other legal professionals. The other members of the high-income group are Australia, Austria, Canada, France, Japan, the Netherlands, Singapore, South Korea, Spain and Sweden. The Western European nations and Canada also make up the regional group with the United States.

Access to civil justice services already is a growing concern in the United States as recessionary pressures are leading many states to reduce funding for their court systems. In some jurisdictions, courthouses have been closed or hours cut back and trials limited. Meanwhile, the Legal Services Corp. uses data from the most recent census to estimate that nearly 57 million Americans—the highest number ever—now qualify for assistance from local legal aid programs. The LSC supports those programs with funding from Congress. Other studies estimate that legal aid offices and pro bono efforts by private attorneys meet only about 20 percent of the civil legal needs of poor Americans.

Recognizing the growing crisis, ABA President Stephen N. Zack in August appointed a Task Force on the Preservation of the Justice System to focus on how the recession is affecting access to justice for Americans. When Zack, who is administrative partner in the Miami office of Boies, Schiller & Flexner, announced the task force as one of his primary initiatives, he warned that “the potential to lose the rule of law in our country is very real.”

While the low U.S. score on access to justice reinforces concerns in that area, the United States scores only barely higher in the Rule of Law Index on the other factors that the World Justice Project has identified as key components of a rule of law regime that helps support societies based on opportunity, equity and respect for individual rights.

Among the nations in the high income group, Sweden, the Netherlands and Austria ranked highest on most of the rule of law factors. Japan and Singapore also scored at the top on some factors.

But because the Rule of Law Index is primarily statistical in nature, it does not offer extensive analysis of these patterns. “While the Index is helpful to tracking the ‘temperature” of the rule of law situation in the countries under study,” states the report issued today, “it is not powerful enough to provide a full diagnosis or to dictate concrete priorities for action. No single index can convey a full picture of a country’s situation. Rule of law analysis requires a careful consideration of multiple dimensions—which vary from country to country—and a combination of sources, instruments, and methods.”

Speaking at a briefing session in Washington, D.C., where the index was released, World Justice Project chair William C. Hubbard said, “Everyone in this room wants progress and a stronger rule of law, but we’re not here with a one-size-fits-all approach to improving the rule of law.” Rather, the purpose of the index is to produce data that help each country identify areas for possible reform, said Hubbard, a partner at Nelson Mullins Riley & Scarborough in Columbia, S.C., who is immediate past chair of the ABA House of Delegates.

The report also cautions against the temptation to use the index results as a simple ranking exercise.

Representatives of the World Justice Project said the index is an important addition to rule of law studies, primarily because it seeks to measure specific elements that define the rule of law on the basis of how those elements actually apply to the real lives and experiences of people in various countries.

“This kind of tool is most important,” said Ellen Gracie Northfleet, the former chief justice of Brazil who sits on the World Justice Project’s board of directors. “We can exchange our intuitive knowledge of what’s wrong and what’s right with measurable data.”

The report being released today is a more refined and complete version of the Rule of Law Index that was released in late 2009, although both versions are based on research conducted in the same 35 countries. The World Justice Project plans to update the Rule of Law Index on an annual basis, and expand it to cover 70 countries in 2011 and 100 countries—covering more than 95 percent of the world’s population—by 2012.

Updated to add comments from the news conference about the index today.