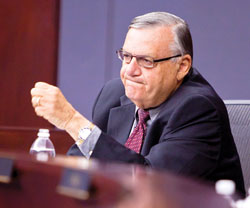 An Arizona sheriff who calls himself the country’s toughest is overseeing an office that routinely discriminates against Latino residents and retaliates against critics of Sheriff Joe Arpaio, contends a lawsuit filed Thursday in federal court in Arizona by the United States government.

It contends that the Maricopa County, Ariz., sheriff’s office engages in a “pattern or practice” of unlawful discriminatory conduct both in county jails and patrol operations and seeks new policies and training to correct the situation, USA Today reports.

“MCSO, through its specialized units and specialized operations, has targeted Latinos in their homes and in their workplaces in a discriminatory and otherwise unconstitutional manner,” contends the complaint. “At the same time, MCSO has knowingly failed to implement adequate policies, training, or accountability mechanisms to prevent unlawful discrimination against Latinos.”

Among other examples, the suit cites claimed practices by the sheriff’s department of making profile stops without probable cause, based on factors such as whether those in the vehicles have luggage and other personal belongings with them; detaining passengers who don’t speak English or can’t produce identification; and, when making worksite raids in pursuit of identity thieves, routinely holding all employees on site until they find those they are seeking, meanwhile conducting interviews to try to determine the immigration status of every worker on the premises.

Arpaio said at a Wednesday news conference, before the complaint was filed, that he is prepared to defend the unusual suit, which, according to the Department of Justice, is only the second such action in 18 years of police reform work.

“If they sue, we’ll go to court,” Arpaio said. “And then we’ll find out the real story. They’re telling me how to run my organization. I’d like to get this resolved, but I’m not going to give up my authority to the federal government. It’s as simple as that.”

In an article published before the suit, the Arizona Republic outlined a reform plan made public Wednesday by the sheriff’s department.

The suit also mentions Arpaio’s collaboration with then-County Attorney Andrew Thomas, in litigation that a number of observers complained flouted the rule of law and targeted their political opponents, including judges and elected county officials. Thomas was disbarred earlier this year by the state supreme court.