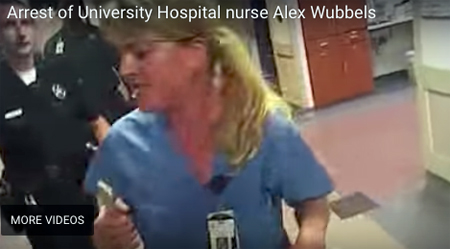 Screenshot of Utah nurse Alex Wubbels being arrested in July.

A Utah nurse will receive a $500,000 settlement with Salt Lake City and the university that owns the hospital as a result of a July 26 incident in which a police officer arrested her for refusing to allow a patient blood draw.

The nurse, Alex Wubbels, announced the settlement at a press conference this week, report the Washington Post, NPR, the New York Times and the Salt Lake Tribune.

The officer who arrested Wubbels, Det. Jeff Payne, wanted a blood draw from a trucker injured in a crash with a vehicle driven by a man fleeing from police. The idea was to protect the trucker from losing his license, Payne’s lawyer has said. The trucker was unconscious and Payne did not have a warrant. The driver has since died. Payne was fired and his supervisor was demoted.

Video of the incident showed the officer forcing the nurse toward his squad car as she screams, “Stop!” and, “You’re assaulting me!” He slaps on handcuffs as she yells, “I’ve done nothing wrong.” Wubbels sat in a the police car for about 20 minutes before she was released.

Wubbels said she will donate part of the settlement money to help people get footage of incidents in which they are involved. Wubbels’ lawyer, Karra Porter, said her law firm—Christensen & Jensen—will provide free legal help to those seeking videos.

“We all deserve to know the truth and the truth comes when you see the actual raw footage and that’s what happened in my case,” Wubbels said at the press conference.

The city and the University of Utah will each pay $250,000 toward the settlement. The hospital will no longer allow police in patient-care areas.