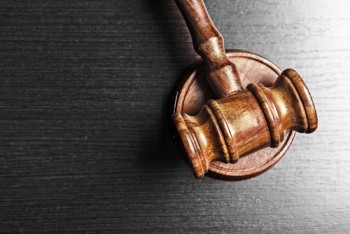 The Nevada Supreme Court has suspended a Las Vegas lawyer for six months partly because he accused a judge of religious discrimination on Facebook.

Jacob Hafter was suspended in a Nov. 17 order that said he made the comments with no basis in fact and also had made false statements under oath in another matter, the Las Vegas Review-Journal reports. Three of the court’s seven justices said they would have instead imposed a stayed suspension.

Hafter criticized a judge who denied his request to change a trial date to accommodate a Jewish holiday. He accused the judge of religious bias on Facebeook and repeated his claim in an interview with the Review-Journal.

“Either she’s anti-Semitic or she’s biased against me. In either case, she shouldn’t be the judge in this case,” he told the newspaper.

The judge said she refused to move the trial date because it would prejudice the plaintiffs and because Hafter agreed to the date in the first place.

Hafter made the alleged false statements during a collection proceeding against him and his wife, according to the suspension order. Hafter said he lacked income or possessions to satisfy a judgment, despite evidence his firm had received attorney fees and contingency payments, the court said.

The court initially said Hafter’s suspension should take effect immediately, with a 15-day period to wind up current client matters. The court gave Hafter an additional 30 days in a Nov. 21 order.

In an interview with the ABA Journal, Hafter said cases of much worse misconduct had gotten lesser punishment. “This is punitive, this is a horrible case,” Hafter said.

Hafter also said he sought to change the trial date five months before the trial when he realized the conflict with the Jewish holiday. And he said his law firm received a settlement during an appeal in the collections case, so his initial testimony was not false.

Hafter added that the First Amendment protected his comments about the judge. 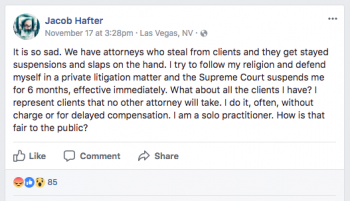 “Overlooking the fact that they can use a private litigation matter and my advocacy to observe my religious practices to suspend me for six months is appalling. Worse, for the court to suggest that because they didn’t believe my speech to be true, or, in other words, they did not agree with me regarding the content of my speech, and therefore I do not have any First Amendment protections eviscerates the entire purpose of free speech. We should be able to criticize our elected judges without fear that we will lose our entire livelihood and professional career,” Hafter said in an email.