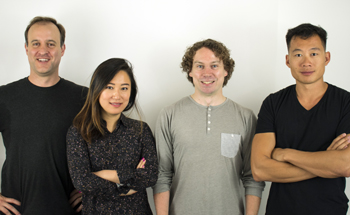 With $10.5 million, serial entrepreneur Justin Kan is about to take on Big Law.

After three months operating under the radar, Atrium LLP publicly launched on Thursday with the stated goal of building “the technology-first law firm of the future,” according to the website. Atrium LLP will compliment, but is separate from, Atrium Legal Technology Services, also operated by Kan. Atrium LTS will develop the technologies and processes that automate repetitive tasks and manage the firm’s operations.

While Kan is not an attorney, the firm’s founding partners are. Augie Rakow is a former partner at Orrick, Herrington & Sutcliffe, while Bebe Chueh is an attorney and founded AttorneyFee.com, which sold to LegalZoom in 2014. The other co-founder and Atrium LTS chief technology officer, Chris Smoak, is a serial entrepreneur and software engineer. Kan is the founder of live-streaming sites Justin.tv and Twitch.tv, selling the latter to Amazon for nearly $1 billion in 2014.

“What’s fundamentally more different is that we’ve taken the pretty radical step of letting the lawyers focus on the legal work and handing over all the operational aspects to Atrium LTS,” Rakow said in an interview with Robert Ambrogi, who broke this story. “We’re taking all the business and operational and technology aspects and essentially outsourcing that to a very well-funded technology operation.”

While separate entities, the financial relationship between Atrium LTS and Atrium LLP is inextricable. Atrium LTS provided the firm a loan to cover all startup costs, and Atrium attorneys are being paid through options in Atrium LTS or a salary for advising the technology company.

During this initial phase, the firm will focus its practice on venture-backed startups, with the intent to scale quickly.

“Our goal is to build the largest multi-practice firm in the United States,” Rakow told Ambrogi.

The firm currently has seven lawyers in its San Francisco headquarters. Rakow says they anticipate adding two to four attorneys a month and open offices in New York and Los Angeles soon.

In June, Atrium LTS closed a Series A funding round worth $10.5 million, which was led by General Catalyst, a venture capital firm focused on early stage investments. Other investors included Jack Newton, CEO of legal technology company Clio.