Vote for your favorite Peeps in Law 2015 diorama! 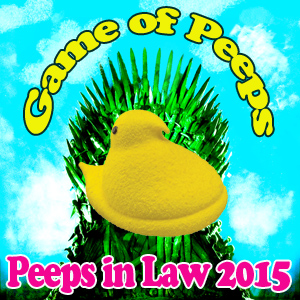 Poll: Which Peeps in Law 2015 diorama should win?

Click here to see the photo gallery with the dioramas.

The entries are in, and it is time for you to decide which of the Peeps in Law 2015: Game of Peeps entries is worthy of the Sugar Throne! This year, instead of picking finalists, we’ve decided to open the field and let our readers vote for any of the accepted dioramas.

You will have until midnight April 5 to vote on which of our Peeps in Law dioramas deserves the grand prize and eternal glory, and we will announce the winners on April 7. You’ll need to vote on a computer or laptop; the poll will not appear on your mobile device. The top three dioramas will receive bragging rights from the ABA Journal and prizes from Just Born, the makers of Peeps. You can see the full contest rules here.

You can view all the entries in this photo gallery, or refresh your memory with the thumbnails below, before voting for your favorite.

#BlurredPeeps, Boston Peep Party and Eco-Peep Tries to Save the Northern Spotted Owl.

Edgar Allen Peep’s The Raven, Hall of Peep-idents and Kid Peep on Trial.

Schmuhl Problem, The ABA’s Priorities and The Case of Rapper Peep-Lawless-Peep.

The Case of the Stolen Peep-berge Eggs, The White Horse In Yugoslavia Defense: A Tribute To the Oral Argument Analogies of Justice Breyer and Vladimir Peeptin: International Law Breaker and Horse-Riding Enthusiast.

May the best Peeps win!

Updated on April 9 to remove a diorama slide from the photo gallery, upon the maker’s request.