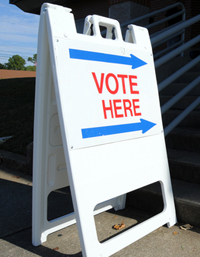 A federal appeals court ruled Wednesday that Ohio must accept provisional ballots in the midterm elections from some voters because they received vague notices informing them they could be purged from the rolls.

The 6th U.S. Circuit Court of Appeals at Cincinnati ruled after the U.S. Supreme Court held in June that a combination process used to purge Ohio voters did not violate federal voting law. Under the process, Ohio voters who haven’t cast a ballot in two years get a notice from the state asking them to verify they are eligible to vote. Those who don’t respond and then don’t vote in the next four years are kicked off the rolls.

The case before the 6th Circuit concerned the wording of the notice that voters received between 2011 and 2015, report Courthouse News Service, the Wall Street Journal and the Associated Press.

The notice sent to voters warned that their names “may be removed” from the rolls and their voter registration “may be canceled” if they didn’t respond to the notice or vote in the defined time period.

The 6th Circuit ruled 2-1 that the plaintiffs were likely to succeed in their argument that the notice did not give an adequate warning as required by the Voting Rights Act. Its injunction bars removal of the voters pending appeal.

The 6th Circuit said provisional ballots from voters who received the vaguely worded warning must be accepted if three conditions were met: They continued to live in the same counties where they were previously registered, they vote at the correct polling place, and they didn’t become ineligible because of a felony conviction or mental incapacity.

Ohio Secretary of State Jon Husted said he wouldn’t immediately seek to overturn the 6th Circuit order to avoid “an unnecessary source of contention with an election only five days away.” He added that Ohio’s procedures will eventually be upheld.

The case is among several dealing with election law issues, the Wall Street Journal points out.

A federal judge ruled last week that Georgia officials must stop rejecting absentee ballots because of mismatched signatures, according to the Washington Post and the Atlanta Journal-Constitution. The temporary restraining order by U.S. District Judge Leigh Martin May allows voters to confirm their identity if they object to a decision that there is a mismatch.

Members of three Native American tribes filed a federal suit on Tuesday that alleges the North Dakota law interfered with their right to vote because many members don’t have a residential address, the National Law Journal reported. The tribes noted that the federal appeals court decision allowing the law to take effect had indicated that “if any resident of North Dakota lacks a current residential street address and is denied an opportunity to vote on that basis, the courthouse doors remain open.”

The suit is the tribes’ response to that wording by the 8th U.S. Circuit Court of Appeals at St. Louis. “This lawsuit is precisely the type of challenge the 8th Circuit suggested could provide relief,” the tribes assert in the complaint.